STRIPED BASS fishing is fantastic. It’s time for shore anglers to hit the SURF...coastal state parks. The fall season appears to be starting off strong, with many charter boat operators commenting on how many large bass there are. These bass are migrating and feeding heavily on all the bait. The best thing is...you catch them during the daytime, especially under overcast skies. Trolling weighted jigs (Chartreuse) with a yellow pork rind and or live lining bunker (Atlantic menhaden) in 15 to 40 feet of water. I like dunking a live eel on the reefs/shoal areas during the late afternoon /evening hours. This technique has produces some very big bass recently...52 inches – 48 pounds, (Outer Bartlett Reef/Norwalk Islands).

PORGY [Scup] fishing remains the best bet in town. All the party boats are targeting them...that’s how plentiful they are. Hit the coastal state parks and spend time chumming...this will improve your success.

BLUEFISH fishing has improved a little. Bluefish schools are scattered but there are some real “alligators” to 16 pounds out there. Mixed in with striper schools are large bluefish schools which are popping up throughout the western Sound including Middle-ground, Norwalk Islands, Sherwood Island, Compo Beach and Silver Sands State Park. They are feeding on just about any bait or artificial lure you offer them. They can also be found in good numbers the eastern Sound (find the birds). 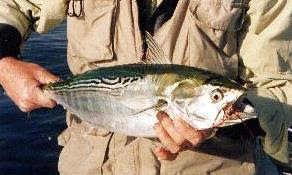 False Albacore and Bonito fishing is very good. The best I have seen in years...throughout the Sound. Pink is the color of choice. Western Sound anglers are scoring using a Hogy epoxy jigs, the (heavy) minnow jig in pink (Milford Point). These small tunas are fast movers, quickly moving to different locations...keep casting they will show.

Dawn and dusk is typically the best time to fish for these inshore tunas but they can be caught during the daytime. They are feeding heavily of young of the year herring and small crabs Try casting metal (heavy) lures (Swedish pimple, albie snax and Epoxy jigs) to feeding fish on the surface. A quiet approach and finding birds (gulls/terns) actively feeding is the key to a successful trip. Jigging for them also works when they are close to the bottom.


Read the full report at this link: Connecticut Department of Energy & Environmental Protection