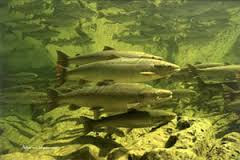 Anglers are allowed to fish for salmon in the Naugatuck River from the confluence of the East and West Branches (Torrington) downstream to the Housatonic River (Derby). Anglers may also fish for Atlantic salmon in the Housatonic River downstream of Derby Dam. The salmon are typically stocked into two designated Atlantic Salmon Broodstock Areas on the Naugatuck River, the “Campville Section” of the upper Naugatuck River from Route 118 downstream to the Thomaston Flood Control Dam (Litchfield-Thomaston) and the “Beacon Falls Section” of the lower Naugatuck, from Prospect Street (Naugatuck) downstream to Pines Bridge Road (Route 42 bridge, Beacon Falls). From October 1st through March 31st fishing for other species in these designated Atlantic Salmon Broodstock Areas is restricted to the gear legal for Atlantic salmon.


• BLACKFISH fishing is very good (Rapid Rock, Race Rock, Sarah’s Ledge, inner Bartlett Reef, Two Tree Island (flood tide), various smaller locations east to Watch Hill. You may want to try rock piles or reefs that are away from the more popular areas to increase your chances of finding a keeper sized fish. Green, Asian or Hermit Crabs will work, especially on jigs. Consider putting the crab (bait) on a chartreuse and orange jig (1.5 – 3.0 ounces in weight/depending on tide and wind). The lighter the jig the better...feel more bites. Use braid in 30-50 lb class and/or a 50 lb fluorocarbon leader (sensitivity to feel the bites is important). Also use a 4/O Gamakatsu hook (Octopus style) when using bait.


• STRIPED BASS fishing is excellent. The Housatonic River is red hot, CT River up to Wethersfield Cove and the upper Thames River (north of Montville). Fish have been migrating into the estuaries and tidal rivers but the reefs in Long Island sound are still producing fish. There is still plenty of Atlantic menhaden (bunker) around that can be used as bait. Live bunker on a three-way or slider rig on the local reefs and rip areas can still provide some results.


• ATLANTIC BONITO & FALSE ALBACORE fishing is good. “They are everywhere” said an eastern charter boat captain. You can find large schools from Millstone Point to Race Rock and the western shore of Fishers Island. Water temperatures are slowly starting to drop, but there are still hanging around. Dawn and dusk is typically the best time to fish for these inshore tunas but they can be caught during the daytime. A quiet approach and finding birds (gulls/terns) actively feeding is the key to a successful trip


• BLACK SEA BASS fishing continues to be excellent on all the major reefs and wrecks throughout Long Island Sound. When releasing fish suffering from “barotrauma”, a buildup of swim bladder gases, try using a recompression tool to help get them back to the bottom quickly. More information is available at FishSmart.org.


• PORGY fishing has started to slow down as fish start their migration to offshore overwintering grounds. Some scup can still be caught on the local reefs or from shore. Locate your favorite Enhanced Shore Fishing Opportunities for these hard fighting and excellent eating “Reef Slammers”.