• STRIPED BASS has remained good especially during the evening and morning hours. Most of the reefs throughout the sound are starting to see larger fish. Live lining eels or bunker while drifting over the reefs has been producing positive results. If you’re able to find bunker and bass in the same area, try the ‘snag and drop’ technique. Once you snag a bunker just open the bail and let it run, the bass can’t resist the temptation. 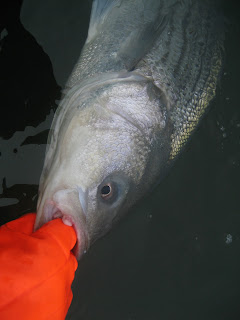 
• FLUKE fishing has been solid (good numbers of fish) throughout Long Island Sound. The walls at New Haven and West Haven have been producing. Deep water (80-100) off Hatchett Reef and Black Point is also fishing well, along with Long Sand Shoal. The best bite has been between the CT and Thames Rivers in 40 -100 feet. You have got to put your time in and be mobile moving from spot to spot. It’s time to start fishing deeper to improve your chances for a “doormat” fluke.


• BLACK SEA BASS fishing continues to improve in deeper water especially on structure. If you are fishing in water deeper than 100’, barotrauma can cause released fish to struggle to make it back to the bottom. A descending devise such as the Shelton Fish Descender can help assist the sea bass air bladder to recompress and get safely back down to the depths. See Fishsmart.org for more information.


• PORGY fishing is very good to excellent throughout Long Island Sound. Even anglers fishing from shore are having very productive trips. If you don’t have access to a boat, make your way to an enhanced shore fishing site where you are allowed to harvest fish at 9”. The best action at these sites has been at Meigs Point in Hammonassett State Park, Sherwood Island State Park and Saint Mary’s by the Sea in Bridgeport. For more information on the Enhanced Shore Fishing Program, visit the DEEP website at: Enhanced Shore Fishing Opportunities


• WEAKFISH reports have started to decline, but there are still a few anglers catching keeper size fish, especially from New Haven to Bridgeport. Key successful areas have been New Haven Harbor and off Milford.


• BLUEFISH fishing has been red hot with large sized blues being reported at The Race and Plum Gut. Diamond jigs, trolling parachute jigs or umbrella rigs, and using fresh bunker or hickory shad chunks have all been effective. Other bluefish spots include the Sluiceway, Gardiners Bay, Peconic Bays, and the north shore of Long Island along with the Stratford Shoal Housatonic River area.


• HICKORY SHAD fishing has slowed down a bit from last week. However, there are still a few fish around in some areas. It may still be worth a try at Black Hall and Lieutenant River as well as the DEEP Marine Headquarters fishing pier, all in Old Lyme.


• STRIPED SEAROBIN fishing is about as good as it can get and can be found just about anywhere in Long Island Sound. Anglers have been reporting record numbers of these ‘poor man’s lobster’ being caught while drifting for summer flounder and black sea bass. New Haven Harbor has been particularly good and you can even catch them from shore at Sandy Point. They love sandworms, squid and any live or dead bait. If you haven’t given them a shot as a meal yet, now’s your chance.


• WHITE PERCH fishing remains good for those dedicated and patient anglers. Spend some time relaxing in any coastal estuary with a little piece of bait (shrimp/sandworm) on a small hook, enjoying some jumbo white perch on the flood tide. Wow, they are good eating. Perch are found in shallow water at any estuary, tidal river and cove along Connecticut’s shoreline. Productive spots include the Pawcatuck River (Stanton Weir Pit/Point), Mystic River, upper Thames River and Niantic River, lower Connecticut River (DEEP Marine Headquarters fishing pier), Black Hall River, Lieutenant River, North/South Cove and Hamburg Cove. Grass Shrimp and or a small piece of sandworm fished on the bottom are the keys to success.


• BLUE CRAB fishing is good. Crabs are done with the first shed and are a bit larger now. Please remember,all egg bearing females must be released without avoidable injury. Minimum carapace length is 5 inches for a hard shell crab.