• Where Are Our Lobsters? Try Canada

“Warming waters from climate change off the Atlantic coast are driving lobsters further north than ever before, disrupting fisheries and - for some - perhaps changing a way of life forever. 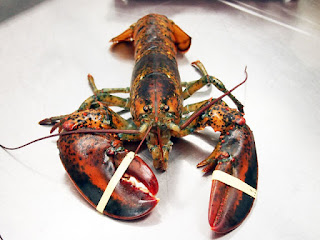 “While the southern New England lobster fishery has all but collapsed, fishers in Maine, Prince Edward Island and even further north are benefiting from the crustaceans’ movement....”


Please visit this link to read the full article: NationalObserver

“Weakfish, Cynoscion regalis, is a member of the family Sciaenidae, found in estuarine and
ocean waters of the U.S. Atlantic coast from Massachusetts Bay to Florida but are most
abundant from North Carolina to New York. Weakfish mature at age 1 and spawn within
estuaries during a protracted spawning period from late spring through summer. Young-of-theyear
use estuarine habitats before joining the adult inshore-offshore and northern-southern
migrations.

“During the last century, landings of weakfish have exhibited “boom and bust”
cycles most likely as a result of large fluctuations in population size. The cause(s) of large
variation in weakfish population sizes are unknown….”