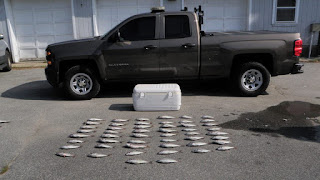 “It was a very busy holiday weekend for ENCON officers across the state! Not only were the parks packed with people trying to escape the heat but Long Island Sound was full of boaters and fishermen taking advantage of the long weekend.


”On Sunday one of our officers in the Eastern Marine district responded to a complaint of three individuals off loading three large coolers from a boat that were believed to be full of undersize porgy (aka scup) and other fish. Upon locating the individuals and completing an investigation the officer determined that two of the three were in violation of state fishing regulations. One individual was in possession of 50 porgy, which exceeds the daily creel limit of 30, and had both a suspended fishing license and a suspended drivers license. The second individual was in possession of 48 porgy, also in excess of the daily creel limit. Both individuals were issued infractions for the violations. 98 porgy and two coolers were seized and one vehicle was towed from the scene. 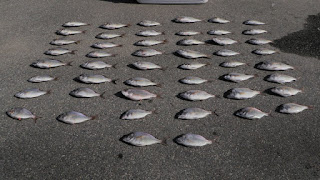 “The confiscated fish were left in an area where they will be consumed by wildlife. When possible confiscated fish and game are donated to wildlife rehabilitators, but unfortunately this is not always an option. It is rarely possible to donate seized fish or game for human consumption. It is very difficult for officers to know or prove how long ago the fish or game was taken and therefore whether or not it is still safe for human consumption. Especially in the summer, it takes very little time for meat and fish to spoil, and our officers always err on the side of caution when it comes to public health and safety....”


Please visit this link to read the full article: CTDEEP


• Trim the Tails On Your Live Bunker

“To make your bait more noticeable, use scissors to cut off one or both of the bait’s tail fins. This will ­hinder its ability to swim with the group, causing it to sink below the school.

“It will also give your bait a ­vibration that’s different from the others, and stripers often key in on the distressed oddball....”


Please visit this link to read the full article: FieldAndStream

p.s.: Trimming the bottom of the tail fin works best.

“Striped bass are here in our bays, coves and along the coastal shore. There are great reports of large keeper fish being caught.

“ Anglers are working for their fish, employing a number of strategies and tactics until they find out what works for them where and when they are fishing....”


Please visit this link to read the full article: WarwickOnLine