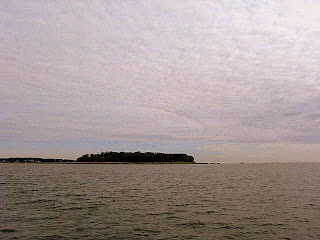 Val and I got out on the water late in the morning on Monday, at about mid-tide and dropping. As you can see from this view of Charles Island, it was generally a cloudy, cool day but without much wind; there was some blue sky hovering at the eastern horizon, but we saw little of that during the day.

I had caught three small stripers before Val arrived; these fish have been camped at the marina for more than a week now. They're spunky, but not much of a challenge.

We ran over to Milford harbor which proved fruitless and then picked up some smallish blues back on the breakwater. 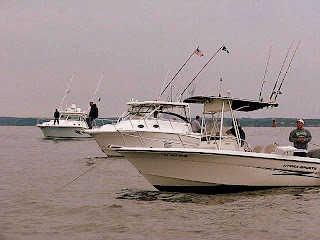 Val was itching to try for some blackfish, so we decided to run for MiddleGround as we could anchor up there for him to dunk the blackfish's favorite delicacy while I could cast for blues/stripers.

The latter didn't work out too well. Had one large fish on that ran the drag for several seconds before cutting me off...undoubtedly a bluefish.

MG is a definite blackfish-fisherman's Mecca. You can see from this shot that boats of all sizes were anchored up in the lee of the lighthouse 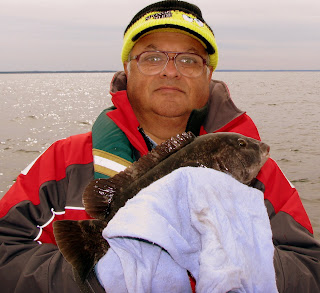 Fishing for blackfish is a completely different activity than chasing bass and blues. You anchor up and dunk a half of a crab over the side using fairly stout tackle as the blacks [also known as tautog or togs] tend to get under a rock or ledge as soon as they know they're hooked...and you have to haul them out of there.

Val has his own system for catching togs which works pretty well; he caught a half-dozen including two keepers, and we saw no one on any of the other boats catch a thing.

So we finished the day with stripers, bluefish, blackfish, and one black sea bass...all of which were returned to the water...except the two keeper togs. They went home to Val's for dinner.