Trip to New Hampshire and Maine...2 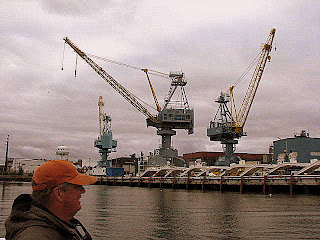 The Portsmouth Naval Yard services the nuclear attack submarines of the U S Navy. The subs come into dry-dock for upgrades and other servicing and the crews stay in floating "hotels" right next to the subs so they can oversee the work and receive necessary training.

The naval yard is installing a barrier-chain around one of the dry-docks that is adjacent to public waterway. Here you can see this odd-shaped boat towing a section of the barrier which will be coupled to mooring buoys already in place.
Apparently someone misjudged the tidal current in the area as the buoys were drifting all over the place when they were first installed. Guess that's under control now. 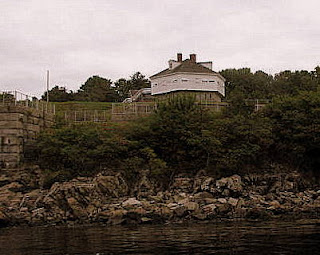 There are at least two forts dating from the Revolutionary period that dominate entrance to Portsmouth Harbor. This one has been reconstructed to some degree and sits on a high bluff that would have afforded an excellent view of any ship approaching the harbor.

Quoting from www.portsmouthnh.com: "In December 1774 Paul Revere rode to Portsmouth from Boston to warn the colonists of British plans to reinforce the fort, to protect its store of powder. The colonists however surrounded the fort and seized light cannon and 97 barrels of gun powder. Many consider the attack to be the first overt act of the Revolution, and it's thought that some of the supplies were used in the Battle of Bunker Hill." 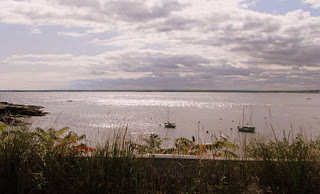 Here's a view from Prout's Neck, a point that sticks out from the Maine shore into the Atlantic. Very private area. All access to the houses is via feeder roads controlled by electronic gates, and they have their own police force. Word is if you drive by going too slowly, they'll pull you over to see what you're up to.

We went up and down the road slowly twice, but no police pestered us...did see three cop cars including one radar trap in that small area though. 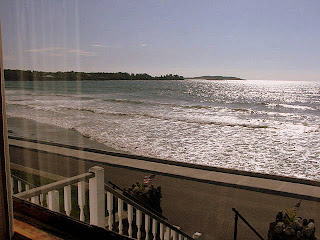 Finally we arrived at the guest house. Our family has been visiting here since about 1971 or so [as mentioned earlier]. This is the view from the large windows on the enclosed front porch which also embraces the dining area.

The body of water is the Atlantic Ocean...next stop: Portugal. 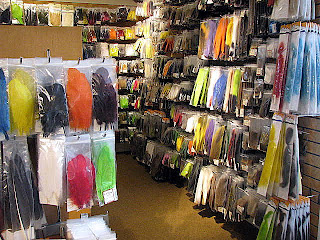 We made our usual run up to LLBean's in Freeport, ME. I was still feeling punk in the aftermath of the bug I'd been fighting and spent most of the time sleeping in the car. Caryl, however, did some good shopping both at Bean's and at a couple of the other of the myriad of shops that now surround this anchor store.

Pic is of a portion of the fly-tying materials area in the fishing section of the store. They've got about everything a dedicated fly tyer could possibly need.