Trip to New Hampshire and Maine...1 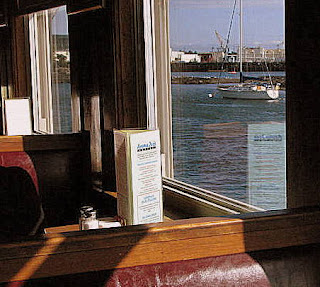 Caryl and I took off for our annual trek to the family gathering on the southern coast of Maine. Trip was unremarkable except that traffic wasn't bad [mid-day Wednesday not being a hot travel time], and the weather provided no surprises.

This gathering used to be our family reunion. We had more than fifty persons showing up from as far away as Phoenix, AZ and filled the guest house with our group. Now however, the generation that held all those cuzzins together has about died off, so the group has gotten smaller and smaller.

But we can count an unbroken string of thirty-eight years that the gathering has taken place. 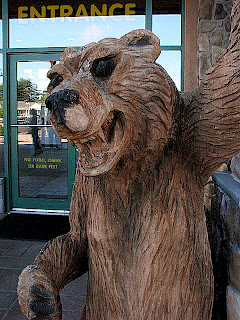 Caryl and I stopped off in Portsmouth, NH for Wednesday night. Ate dinner at Warren's lobster house, just across the river in Kittery, ME. Note that when you travel along the New England coast, everything takes on a nautical slant...including the views from many of the restaurants.

Warren's has about the finest salad buffet going...all very fresh and nicely prepared. The food is good; can't report on the drinks as we didn't have any.

After dinner we zipped up the road to the Kittery Trading Post where we each found a few necessities to purchase. KTP often has good deals on clothing, but in terms of hunting/fishing stock it falls way short of BassPro and Cabela's. Nevertheless, we seem to stop there each year. 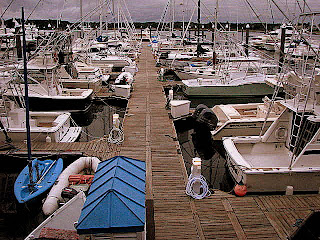 Thursday morning I was out the door by 0600 to meet Capt. Peter Whelan at the docks of the Wentworth hotel. I've fished with Peter a number of times and he knows the waters very well in the Portsmouth/So. Maine area.

Unfortunately, the water temperature is still in the low 60s in Portsmouth...much warmer than normal; as a result, the stripers have not schooled up yet and we had little luck. And the wind was howling which kept us in the harbor area...we couldn't get out on the Ocean and run up the Maine coast. The most fish we saw were under Peter's dock. They'd come out and grab hunks of mackerel chunks, but that was it.

Nevertheless, this is a great area to fish...even if it's mostly sight-seeing rather than fish-catching.

A lot of what you see is related to the Portsmouth Naval Yard which has been operating for darned near as long as this country has had a navy.

This building is actually an old naval prison or "brig." It looks in great shape from a distance, but up close it's a disaster. There are bushes growing up on some of the roofs; windows broken or completely gone, and so on. Would be a great location for a marine research center of some sort, but the costs to renovate would probably sink such a project. 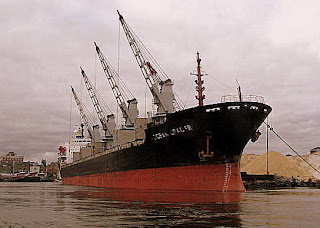 This freighter has probably come in from South America. It's loaded with salt for New England's roads this winter. In the street next to the freighter are lined up a number of trucks each to receive its load of salt and head out to the next distribution point.

More on Portsmouth's harbor and the naval yard in our next blog.