A Few Big Blues at MG 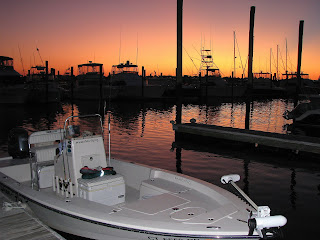 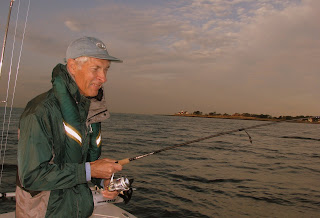 It was going to be a bright and sunny day, so we wanted to get out on the water before the light drove the larger fish into the depths--we departed the marina shortly after 0600. 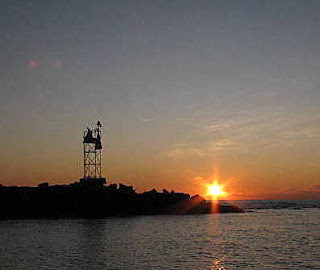 Another reason for leaving the dock early was that it was the Friday of Labor Day weekend, the unofficial end of summer and of the boating season, when all the owners of UseLessCrafts would be trying to unknot their boats from the docks so they could say they'd been out on the water at least once since Memorial Day weekend.

When all those tubs hit the River, fishing anywhere near the channel would be like boating in a washing machine...thus our early departure.

So we got to see a nice sunrise.

We hit the small bluefish spot and landed a bunch of them while we assessed the wind and waves to decide if a trip to Middleground would make sense. The wind was coming up a bit, but being northeast it was off the land and shouldn't be too bad, so we took off SW. 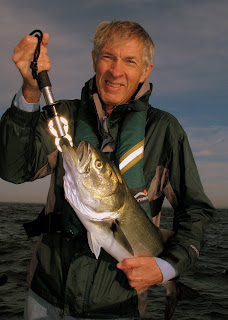 It was quiet out at MG. Not a single boat fishing the entire shoal, except for us. After a while the big party boats arrived from Port Jefferson, but until that time we had the area all to ourselves.

Unfortunately it was also quiet fish-wise. No sign of big ones on the electronic fish-finder...and they weren't exactly jumping in the boat. 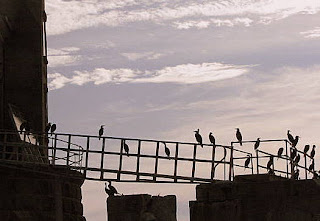 We did, however, have a couple of hits and successfully landed those fish that did hook up. One of the fish darned near spooled me [ran off all the line from the reel] and we had to start up the boat and chase after each one we hooked to have a chance of landing them on our light tackle. 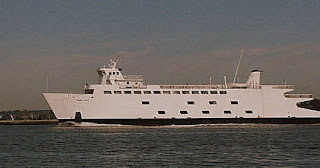 The photos pretty much tell the story.

The birds were on the railing at the MG lighthouse. Looked as though they were auditioning for Alfred Hitchcock.

It was a little rough heading back to the shore, but it calmed the closer we ran to the mainland...so we took off for Bridgeport Harbor to check out the alleged bunker run that was supposed to be going on over there. 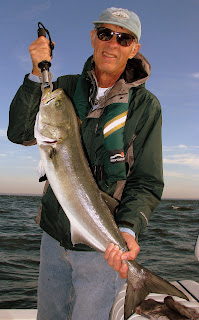 No bunker were visisble, but we got a close look at the Bridgeport to Port Jeff ferry, Park City, as it left for Long Island. And we did have a few hits from smaller blues...but that was about it.

On the way back to the marina more and more boats were streaming down the River toward Long Island Sound. It was a good time to end the trip.

Where to register not specified in the article, but probably through Stratford Rec: Acorn-Online.com