The Big One(s) Got Away 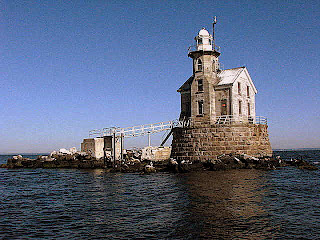 I picked up Rich N. at Newtown Bait & Tackle in Newtown, CT at 0630 this morning. It was 48°F at home when I left for Newtown and fog hung over I-84 especially at the bridge over the Housatonic River.

Rich was ready to go as he'd been at the shop since who knows what o'clock providing customers with worms, sandworms, frozen sandeels, shiners, eels, and other goodies that fish love to eat. However, we'd fish no bait today...live or frozen...just plastic and feathers. 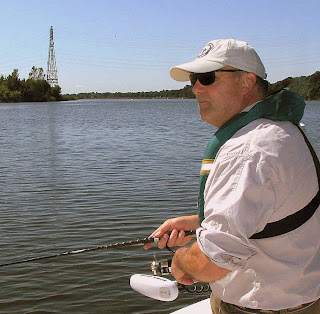 At the marina Shoo-Fly 3 was soaked with dew as the cold air had condensed on all the surfaces of the boat. She started right up, as usual, and we lit out for the mouth of the Housatonic River.

Went immediately to the spot where the small bluefish had been hanging out...just to put a bend in the rods. That worked just fine and we boated a bunch of them, including one on the 7-wt. So that was fun for a few minutes, but we were thinking about larger fare. The wind was NE at about 5 kts., which was not bad at all, so we turned the boat SW and headed for Middleground, about 7 miles out in Long Island Sound.

Things were not exactly hopping at MG. There were a couple of boats, including some large party boats, that were probably after porgies...but we saw little in the way of caught fish from them.

I had a hit from a blue that was probably 8 lbs. and got him fairly close to the boat before he spit the hook back in my face. Rich had a really big blue grab his lure. The fish catapulted completely out of the water and fell back with a splash you'd expect to see from throwing a cinderblock in the water.

That was it for larger fish for the day. 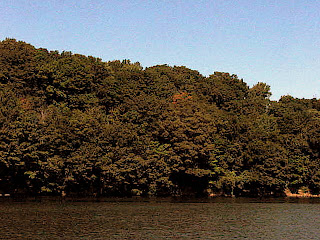 MG was slow, so we headed back to the River, caught some more smaller blues, and then headed through the marsh and up-River to see if anything was moving up above the bridges.

Only thing moving was a bit of color back into a few of the trees along the River bank.

It was a gorgeous day out there. Reasonably warm, no heavy wind, no clouds. Would maybe have been better fishing if it weren't such a nice day, but it was fine to be comfortable out on the water and enjoy the scenery.

Water temps on the Sound and in the River had fallen to 69-70°F.