That Was A Short Summer! 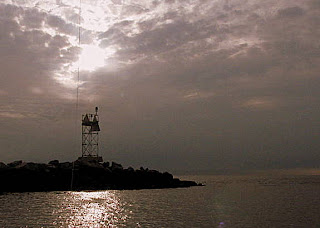 It was 57°F when I left home on Thursday morning at 0600. The day before it had been high-80s and humid, humid. humid. This change in the weather felt more like late September than early August. Even the water temp had dropped from 74-75° on Tuesday to 71° today.

Not complaining, mind you. Fall weather's absolutely the best, far as I'm concerned.

I donned my insulated vest and never took it off all morning. 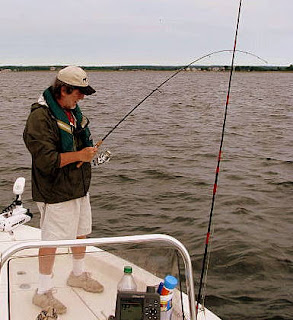 Charlie W. was on Shoo-Fly 3 with me this day. Charlie frequently takes a poll of local tackle shops and fisherfolk so we're up to speed on where the stripers and blues will be located when we hit the water.

The downside of that is when fishing in the greater Housatonic River area is slow...we know about it from the start of the trip. So I don't think either one of us expected much from the morning's outing, based on the reports on the way fishing's been out there.

But, of course, you never know what's going to happen until you get out there and flail the waters for a while. 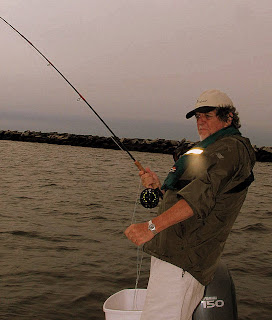 We cruised the breakwaters hoping that the Garmin would spot some activity down below...but no go.

We had decided early on to get out on the big flat at the mouth of the River, but I changed that plan at the last moment, suggesting we should try the area where Mal and I got some fish on Tuesday. And, as luck would have it, as the area rounded into view we could see terns diving on bait...a good sign...usually. Terns are sometimes called "liar birds" as their diving and dipping may be just on bait with no game fish to be found below.

Today, however, they weren't blowing smoke...they were on pods of small bluefish and Charlie and I were quickly into them. Got 'em on swim baits, flies, and surface poppers. They weren't big, but they were hungry and persistent. We caught...dunno how many of them. Kept a few for Charlie to take home to the smoker. 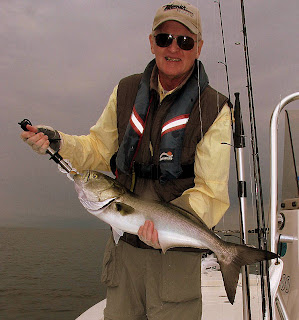 Meanshile, Charlie and I yakked about the terns, trying to figure out what variety of tern the various birds were. My Audubon field guide lists about a dozen different ones...not all of which frequent this area; but there's a bunch of them...and they all look pretty much alike to these eyes.

I suggested to Charlie that with all the different varieties of these birds, to every season, there is a tern.***

After a while Charlie had a hit from a larger fish that managed to throw the hook after just a few seconds of running line off his reel. Then I had a bite and managed to land the fish...a decent 8-pounder.

Could this be a sign that the bigger blues are finally going to start showing up in shallow water? There are a lot, a real lot of baitfish in the lower River; someone's gotta show up and start eating them.

As to our one large blue, I suggested to Charlie that when he cleaned the fish, he should inspect its mouth for hook holes...in case the fish I caught was the same one that had been on his hook.

"Striped bass -- Any angler who pulls in a bass in daylight can consider himself or herself among the luckier people in Long Island Sound. Even the night bass fishing has slowed...."