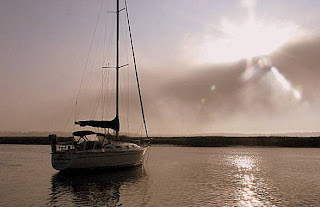 Had thought—because of some scheduled health-related events—that Shoo-Fly 3 might be on the dock all this week. As it turned out, one event was cancelled and the other went forward without complication, so we called Mal Y. to see if he was available to fish.

One doesn't mess with Mal's tennis obligations, but fortunately he had none set for Tuesday morning, so off we went.

It was patchy fog all the way down Route 110 along the Housatonic River on the drive to the Marina. At the boat, however, the sun was punching its way through the gloom and the local horde of swans was out for a feed in the marsh. 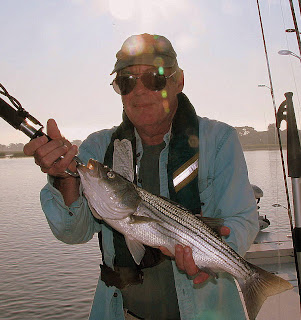 Mal had the hot hand on that day. He picked up the only striped bass of the trip...and then two or three bluefish before I had even a hit. Not that we caugth that many fish. They were scattered all over the place, although we did see one brief surface-feeding spree at the mouth of the River.

After an hour or so we saw a new bank of fog approaching from the east. First the Milford shoreline disappeared...then Charles Island was lost in the fog. By the time the ground-cloud caught up with us visibiltiy dropped to about 100 yards...so we had to put off thoughts of running to Middleground. Would have been a good day to run there as the winds were, believe-it-or-not, only light and variable. 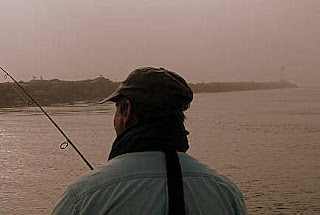 We hanged around the River mouth picking up a blue here and a blue there. I got a couple on my "Toothy Critter" fly on the 7-weight.

We had a quiet morning as Mal had forgotten to have his usual injection of caffeine, and I was on my second day-in-a-row of getting up at 0500. I think we were both operating at about forty percent of mental capacity. We just threw one lure after another without a lot of discussion about life, liberty, and the pursuit of fishiness. 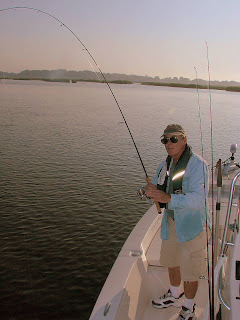 So, no wind howling...very few UselessCrafts out there throwing wakes at us...catching fish here and there....