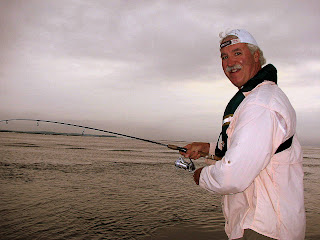 At 0700 it was about 72°F, overcast with winds E at 5-10 kts. Overcast is always good in the summer as the lack of bright sun tends to keep the larger fish in the shallow waters where they've been feeding during the night.

I arrived at the Marina to see someone down on the dock messing with Shoo-Fly 3. It was Don G. [aka: Don, Don the Striper Mon]; he'd arrived a few minutes early and rather than laze in his car he'd gone to work getting the boat ready. He'd disconnected the shore power and taken the canvas off the console and bench seat. He brought the canvas to the car and gave me a hand lugging all my rods and stuff to the boat. As a result, we were ready to push off when Val S. arrived a few minutes later. 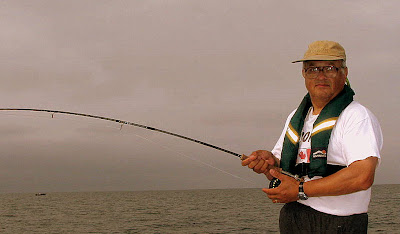 We three headed out toward the mouth of the Housatonic River fully intending to motor to Middleground [Stratford Shoals] where, it has been rumored, large striped bass and bluefish have been congregating. However, a couple of spots attracted our attention along the way...which delayed us from starting the 7-mile trek SW to the Shoals. This delay turned out to be good for two reasons:

First, the winds started to blow up to 15 kts. out of the east which would have made the trip back to the River...uncomfortable.

Second, the first spot we went to produced a 9-pound bluefish for Don. This turned out to be the only large fish of the trip [bottom photo]. 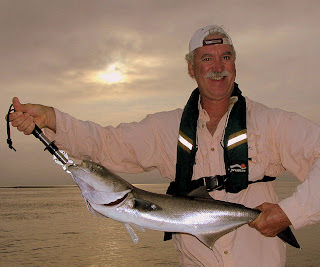 We did, however, bump into that same batch of smaller bluefish that we've seen on our last trips. They're always a lot of fun and we caught them on swim baits, surface poppers, and flies. Val had a particularly good time nailing one blue after another on his fly rod.

We actually got tired of catching these small fish and decided to look for bigger fish. We checked a few of the usual places, but with no luck.

Next we thought we'd run up the River to see if the big bluefish have worked their way upstream yet. Knew it was early for that, but thought we'd check it out anyway. We did see some bait up river, but could find nothing feeding on it.

So the old maxim of never leaving fish to find fish held true once more. Still it was fun to go back up the River. Checking my records, this was the first time Shoo-Fly has gone above the US-1 bridge since 15 May...about the time the main body of stripers moved out of the Housatonic.

Back at the dock, Don gave me a hand with the clean-up. He got out the environmentally correct soap and the brush and gave the boat a thorough going-over...while I stood there with the hose and did the rinsing.

Boat looked really spiffy when Don was done with it. Need to get him out fishing more often!