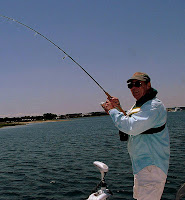 On Friday afternoon, we gassed the boat at Brewer Stratford Marina and Mal Y. and I headed out on the the Housatonic River.

It was a lovely day. A bit cool. In fact, one boater we passed out by the breakwater called over to say it was "...a nice October day...." He was right, it did feel more like early October than mid-July.

Although the weather has seemed to be cooler, cloudier, and rainier than in recent years, a check of my fishing-trip database shows that the water temp, at 69-70°, is just about the same as it has been at this time for the past several years. Maybe we've just forgotten how lousy the weather was in prior seasons. 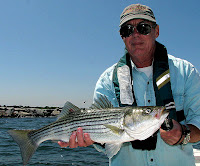 We followed a similar fishing pattern as the one Rich N. and I had used on Wednesday...with similar results. On the first flat I got one hit on the Bass Assassin and Mal hooked and landed one fish...possibly the same fish that had hit my lure...see the top photo.

One fish doesn't make a trip, but this one meant we're now up to 33 straight fishing trips without getting skunked. Hope we can keep that string going.

Was interesting that the water was unusually clear. We were seeing bottom features in 7-8 feet of water; this is not at all typical. I remarked to Mal that it must be all the zebra mussels filtering the River water for us.

We moved to the second flat and were into fish very quickly. There were enormous quantities of sand eels moving over the flat on which the fish were undoubtedly feasting.

Was also interesting that we caught no bluefish on the flat...it was all stripers plus two non-keeper fluke. We weren't going to complain about that mix of fish, but Mal would have liked to invite a blue or two home for a grilled dinner.

Charlie W. paddled out on the flat in his kayak. We were close enough to each other to exchange information on the fishing. We saw him hook only a sea robin, and then he headed north, right in close to shore. We headed south and there wasn't much going on there, but unbeknownst to us, Charlie got into birds and a feeding slick*.

The next morning we got this e-mail from him: "'My kingdom for a cell phone,' I thought. The larger fish were in there feeding on top. I tried shouting but you were out of range. I took three (on the broken rod) all in the 25-27-inch range before heading in and a bluefish while trolling back across the river...."

The kayak is a great fishing tool as it allows the angler not only to get in very shallow but also to do it stealthily...Charlie uses those advantages to good effect.

Once again, a couple of hours after the stand of the high tide the bite tapered off. Not to worry though: Mal had caught what he thought was the largest striper he'd ever landed. I got a striper on my Toothy-Critter fly, and we'd had a fun afternoon.

*An oily patch on the surface of the water...created by feeding fish as they chop up smaller fish releasing fish oil into the water.