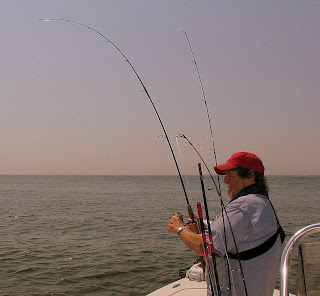 On Tuesday, Charlie W. and I ventured out at the stand of the high tide, about 0715, to see what we could find in the way of fish. We found some, but compared to 25 June's trip, they were scattered all over the place rather than concentrated in specific areas.

Don't know what the reason for this might be other than the bait must have been on the move. We didn't see the massing of sand eels seen on earlier trips and this may have affected the patterns of the fish. 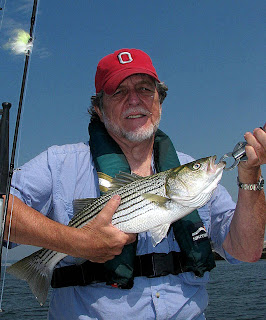 Winds were out of the east at 10-15 kts, rising to 15-20 as the morning progressed. Bright sunlight was nice, but it probably didn't help the bite.

We landed several feisty stripers and a few bluefish to five pounds. Charlie took the later home to be smoked. [If you haven't had smoked bluefish, you've really missed a treat.] 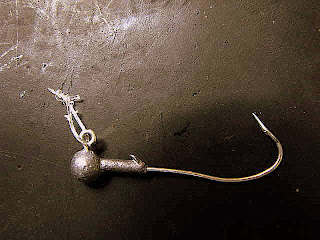 We lost numerous bluefish to cutoffs. You can see from the photo lower down that the blues were tending to strike short and chop off the ends of our Bass Assassins and other plastic, jig-head-mounted lures. Between cutting off leaders and chopping off lures, the blue fish can cost a few bucks over the course of a couple of hours. 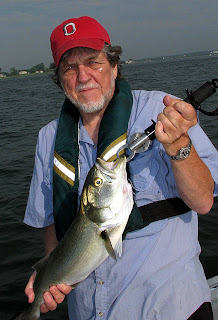 It's one thing to lose a nice fish to a cut-off leader, and another to lose one to lousy equipment. You can see from the photo that one of the 1/8-oz. jig heads I was using straightened right out on a larger fish. This particular jig was purchased from BassPro who ought to know better [the package says "Manufactured to BassPro's Specifications in Honduras"...so it's not the Hondurans's fault if they made them to BassPro's specs]...and it was the second fish I'd lost like that in two trips [so I should have known better]. After the second one, though, I changed over to similar jig heads from Newtown Bait and Tackle...their own brand made for them by a local supplier, and had no further problems with hook-straightening. Live and learn [even if slowly]. 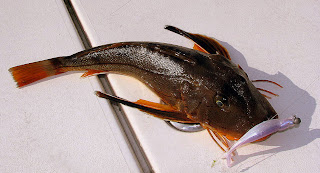 We did have a few sea-robin raids. Although these are highly undesirable as game fish, they do put up a pretty fair scrap on light tackle...and they're sort of handsome fish in a prehistoric way; orange/brown coloring, lots of fins and feelers sticking out. They have a hard, shell-like carapace [head], but the tail section is supposed to be edible if you can find a way to cook it properly. There are probably some recipes on the Internet for them, but I suspect it's an acquired taste thing. 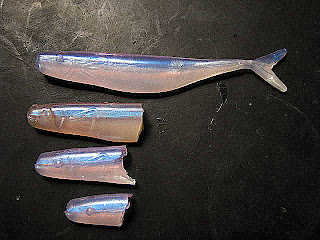 So we motored about, finding a few fish on this flat and a few on that flat. Not many other boats out there...which made for a quiet morning. It might have been a good day to run to Middleground [Stratford Shoals] if it were not for the winds which would have made for a miserable trip. And even though we didn't catch large numbers of fish, we did keep intact Shoo-Fly 3's string of now 29 straight trips without getting skunked.

With the summer doldrums ahead of us, the pressure's on to keep that record going. 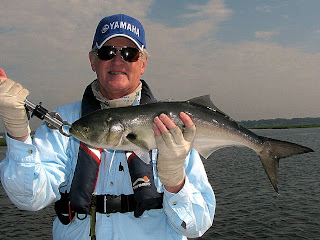