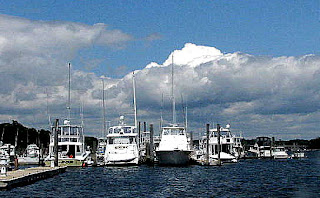 Val S. and I took off from the docks in Stratford about 0900 on Saturday morning. Would have preferred not to fish on Saturday as it gets too busy with other boats and fisherfolk out there...but our planned trip for Friday got rained out, so it was Saturday or nothing.

Weather-wise, it was a good day...a lot more clouds than forecast and, of course, a lot more wind. In fact, it was downright chilly out on the water, especially when running the boat. 70° felt good back out the dock, but it called for extra layers of clothing out on the River. 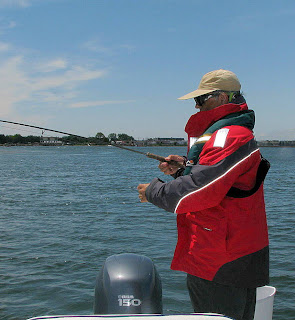 Just three days before, Charlie W. and I had a good trip by hitting areas that could be taken advantage of only at high tide...and, the tides not being that different on Saturday, we followed the same pattern.

Please keep in mind that we fish shallow water almost exclusively...and actually exclusively with light tackle—8-10 lb. spinning outfits, for example. So following the same pattern seemed to be a good idea—but it wasn't. We couldn't find a fish...neither did we see any other fisherfolk catch a single fish.

After about three hours of casting our arms off, we decided to work our way back to the dock. 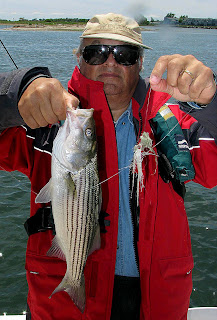 Then Val had the idea that we should try up on a black-mud flat, if for no other reason than that it would be out of the wind in that spot and it was a pleasant area in which to spend a few minutes. An added bonus, as it turned out, was that the water over the flat was about five degrees warmer than the water in the River.

We got in there and immediately hit fish...both stripers and bluefish. They weren't big fish, but at least we were catching [and continuing Shoo-Fly 3's string of now 25 straight trips without getting skunked].

We had a couple of missed hits and a cut-off or two as blues took advantage of our light, wireless leaders.

Val was throwing feathers [using a fly rod] and was getting more strikes than I was, so I switched to flies as well and began connecting more frequently. 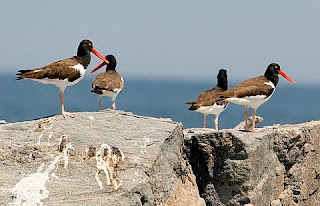 It's funny how this fly-rod superiority comes about. Normally you'd think the spinning tackle throwing light jigs with Bass Assassin plastics would take more fish. But every once in a while the fly rod is more effective. Perhaps the flies matched the hatch more closely than the plastics.

Out on the breakwater we saw a pair of American Oystercatchers. I took a photo, but it wasn't as good a pic as this file photo taken by Deb Persson in 2007. They're very cool-looking birds with their orange beaks and sharply contrasting color pattern.

We also saw a small flock of Brant; beginning to wonder how long these geese will continue to hang in our area. 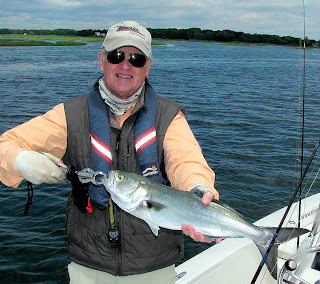 The striper Val is holding above obviously isn't a big fish; however, Val caught it on a fly of his own design and manufacture. Taking a fish on your own lure is a highlight of any fly-tier/fisherman's day...big fish or not. The big ones can come later.

So the first three hours of the trip were not productive, but the last hour or so was very good and a lot of fun.

Taken as a whole, it was a great day on the water.