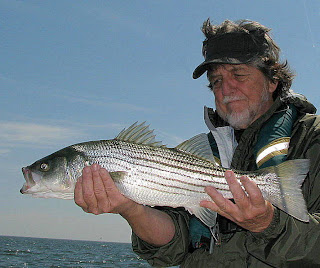 Charlie W. joined me on-board Shoo-fly 3 on Wednesday. We took off from the dock at 0900 and the peak of the high tide and fished for about 3.5 hours.

Taking advantage of the high water, we went directly to those spots where the current moves well early on the drop...and where we could get the boat in. These spots are nearly dry land at the low tide, but that doesn't bother the fish when the water's moving over the mud, sand, and oyster shells at higher tides. Stripers and blues cruise these areas to pick off the food that's being washed out of the creeks and off the sandbars into deeper water. 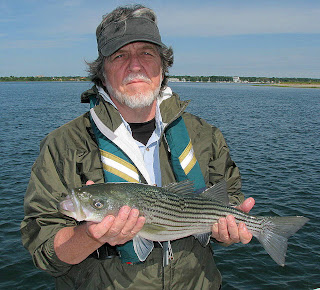 The sun was warm on our faces [even at this early hour, lathered with sun-screen lotion] and the wind was brisk out of the north. But the forecast was for rain and thunderstorms in the afternoon, so we moved from spot to spot finding fish scattered here and there in almost every place we fished.

Interesting how long the flocks of Brant geese have been around this year.

This little flock allowed us to get quite close before they took off...

...showing the characteristic white "V" shape on their backsides. These are beautiful little geese, smaller than the Canada Goose.

Identify.Whatbird.com says the Brant Breed in eastern Siberia and along the northern coast of Alaska and western Canada; Pacific subspecies spends winters along the west coast from British Columbia to Baja California. Preferred habitats include tundra and coastal islands in the Arctic during breeding, and salt marshes and estuaries during winter. 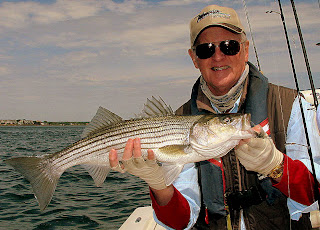 Charlie and I continued to pick up stripers here and there...and one bluefish that Charlie will smoke for a nice snack-on-a-cracker. No big stripers, 25" was the largest, but we were fishing very light tackle. We even caught a couple on flies. 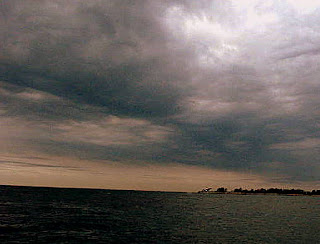 Then, this cloud that we'd been watching decided to move down toward us as the winds veered to the east and then south. We decided that discretion was the better part...and headed for the dock.

While we were cleaning the boat, it started to sprinkle.

Great morning on the water.