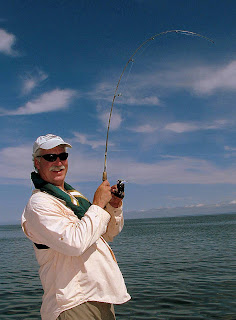 The mouth of the Housatonic River was loaded with fish on Thursday...stripers and bluefish all mixed in together.

I met up with Don G. in Southford [don’t know if that’s a real town or not; it’s a co-joining of Southbury and Oxford; there’s a small state park there that’s quite nice] around 1100 and we lit out for Stratford. Stopped at the Pickle Barrel at Hard’s Corner to get sandwiches [the grilled chicken on a Portuguese roll is very good and very low in fat]. We were on the water by 1230.

Conditions were ideal: Cloudy skies; very little wind and it was coming from the west which meant that the mouth of the River would be protected and, therefore, fly-castable; also, the high tide was scheduled for 1435 which meant that we’d be fishing at the perfect time to be in the shallows; and the water temps were circa 65° which is good for both stripers and blues. 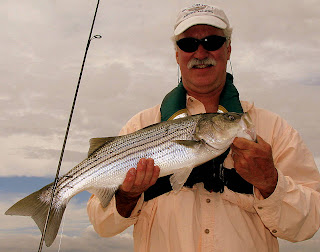 First flat we pulled up on we were into fish. I hooked the first one, a 26” striper and from that point on we were both on fish, both stripers and blues. Two fellows in kayaks were also on the flat and were getting fish on surface poppers.

We had several cut-offs as bluefish sliced though our leaders. I tried using a wire leader, but that only served to slow the bite down…even the blues weren’t hitting the lure with wire. Went back to 30-lb. test bite tippet and started getting hits again.

The bite dropped off as the time of the high tide approached. You could clearly see the seams in the water—previously exaggerated by the incoming tide—becoming less conspicuous.

It was time to move. 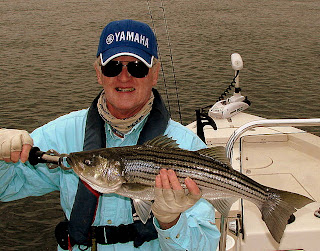 So we moseyed along the River channel. Don spotted birds working off to the right, so we lit out over that flat and were soon into the same sort of action…bass and blues. We had doubles. We had cut-offs.

I got out the 9-weight fly rod and was landing both bass and blues with that. Didn’t have any cut-offs with the fly rod as I was using my “toothy-critter” fly. I’ll have to post a photo of that fly, but the idea is that the materials are all tied in at the bend of the hook leaving the rest of the shank to the eye bare. This acts as a “wire” and unless the bluefish really inhales the fly, his teeth are working on the hook shank, not on the tippet.

None of the fish were particularly large. The stripers ran from 20” to 26” and the blues were a bit smaller.

When the bite on that flat slowed, we moved over to another spot that works well on the outgoing…and caught more fish there. In fact, the only place we tried where we didn’t get fish was off Russian Beach; however, two fellows trolling the tube & worm were getting stripers there quite readily.

So that’s the way the day went. We packed it in about 1700…probably could have stayed out there hitting fish for hours more.

Great day on the water.