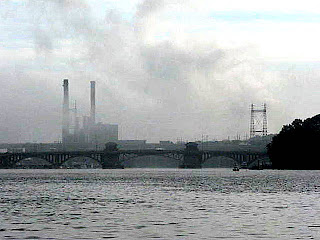 Coming down the River Road [Route 110] from Shelton at 0630 Wednesday morning, it looked as though we'd be starting off the day's fishing in a fog bank. It was pretty solid out on the Housatonic River. Mal Y. joined me and reported he'd had the same thoughts...especially since we got "fogged" off the River a couple of weeks ago.

That was a different story, however, as the fog was complicated with low tide, intermittent rain, and a cold wind. The low tide forces boats into narrower confines...which seriously increases the danger in the fog. But with Wednesday's high tide at 0716 it would be no problem getting out to fishing areas as we could run through the marshes where the UselessCrafts seldom go. Besides, it was Wednesday and not the weekend, so most UselessCrafts were tied up somewhere...which is exactly where they belong...tied up. 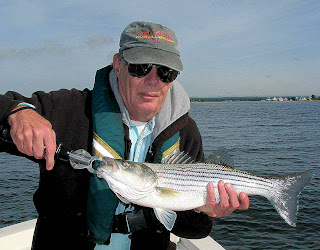 But not to worry, the fog was much less dense near the mouth of the River. Looking north toward US-1, I-95, and the Devon power plant, it was obvious that the fog was lifting and burning off.

We snuck up on a flat using the trolling motor and practically ran over a small bunch of fish. It was odd. There we were tooling along at maybe one knot, not seeing any movement on the water, not getting any hits, when suddenly these fish, probably striped bass, bolted right out from in under our bows. It was like when fishing the flats in the Florida Keys and you run up on some shark, cuda, or other large fish that you didn't see. All that's left is a big boil on the surface of the water as they depart for distant waters. 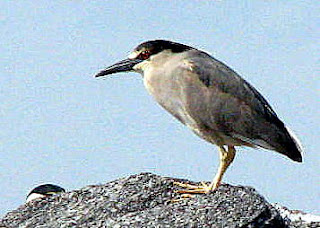 I did get one nice bass off that flat [next-to-last photo, below], a 27-incher that put up a good battle before deigning to pose for the camera. But the flat didn't want to produce for us today. Must be that the bunch of fish we spooked passed the word to the others: Psssst: Freddy, don't take any plastic minnows!

We motored further out in the the mouth of the River and Mal began to hook up. No large fish, but of size-decent to put a bend in the rod and give Mal fits as they tried to run under the boat...both stripers and blues. 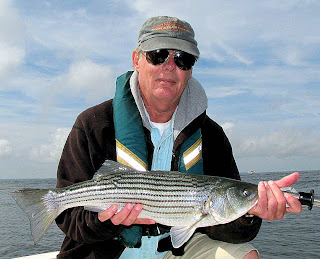 Speaking of gulls, there are four telltales as to where fish are feeding: The 4 "B's": Bass, Blues, Birds [gulls and terns], and Boats. 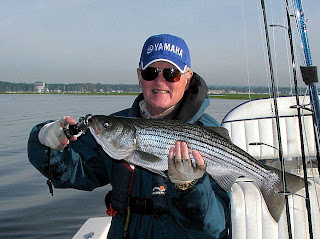 This was the last "B." We'd been watching several boats grouped together on the other side of the River mouth. As most saltwater fisherpersons know, grouped boats is a telltale for schools of feeding fish...typically bluefish. So, as fishing had slowed for us on our side, we decided to mosey over and see what was going on.

Sure enough, they were on a feeding frenzy of bluefish...but very small bluefish. This is why we couldn't tell what the grouped boats were up to from a distance: The splashes from their feeding were very small. When a big blue hits a bait on the surface, you can see the splash from a long way off...as though someone had thrown a cinder block in the water. This was more like someone pitching in a pebble. How big were they? Doubt that we say any fish over 16"...and many a lot smaller. 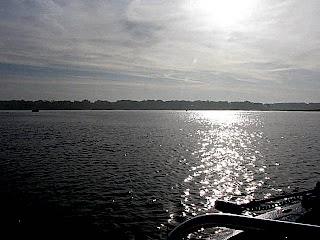 Still, it's always fun to fool with feeding bluefish...even small ones if you're using light tackle, as we were. So we proceeded to chase the schools of fish around and caught two dozen of the little "rats." Threw them all back...except for two larger ones that Mal had caught earlier.

We decided to call it a morning...although we probably could have stayed out there catching small blues for hours more. If I'd had my one-weight fly rod along, just might have done that.

Mal was the high-liner for the day...caught most of the fish.

As we left the River, high cirrus clouds coming in from the west were indicating that rain was soon to follow.

A great day on the water.

Apparently Governor Rell still hasn't signed HB5873 [now designated as Public Act 09-173]. The state says if she does not do so, the state will refund the license fee to those who've already purchased one. Can't personally imagine her not signing the PA, however.