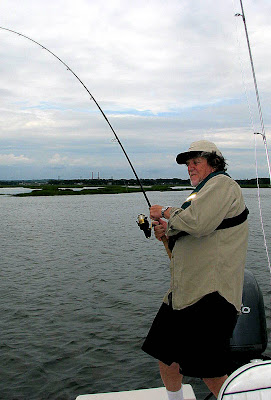 Charlie W. and I left the dock at 1:00 pm on Saturday despite cloudy skies and warnings of rain and possible thunderstorms. Of course we weren't going far...we'd do all of the day's fishing within two miles of the dock, so if the weather cranked up, we could scoot back safely.

First flat we tried, we struck gold. It was all happening so quickly that I don't recall which we landed first, the keeper striper or the 12-pound bluefish.

Actually, I shouldn't say "we." As you can see from the photos, Charlie was the one pulling all the big fish into the boat. 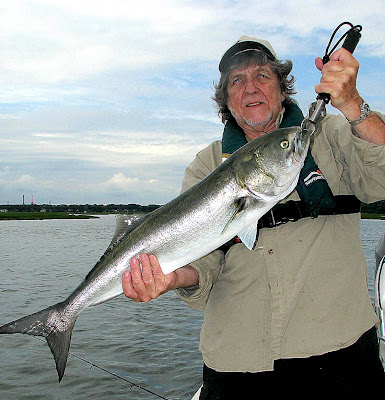 Funny how that sort of thing happens. There we were, standing 12 feet apart, using very similar lures and fishing techniques and Charlie hooks all the fish.

Well, that's not entirely correct either. I had some large fish on, but one spit the hook back in my face and two others cut me off...first through a 30-lb. test bite tip and second through 50-lb. Obviously, these were substantial bluefish...but you can't count them if you don't catch them. 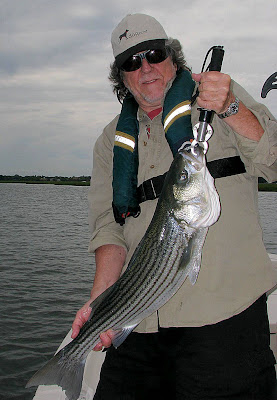 So we fished that flurry for about an hour. When that died off we noticed fish breaking the surface further up on the flat, so we ran over to them on the trolling motor.

We soon had fish swirling all around us...probably stripers feeding on sand eels or some other bottom-dwelling critter. Couldn't get them to hit anything. Tried skinny flies to immitate the sand eels, but that didn't work. None of the plastics worked either.

From that point on the fishing got tougher.

We fished some other spots and I managed to get a couple of smallish stripers into the boat without incident. 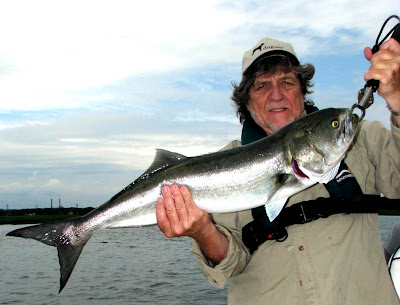 We saw Don G. out there in his Pathfinder. Said he and two fishing companions had been doing well on stripers and blues.

It started to rain.

We went back to the first flat and found the fish still feeding there, but again, we couldn't figure out a way to get them to bite. Just too much real bait in the water, perhaps.

So Charlie had the high rod today. He boated and released the 29" striper in the photo, the 27" and 31" bluefish, also pictured, and several other bluefish.

Great day on the water.