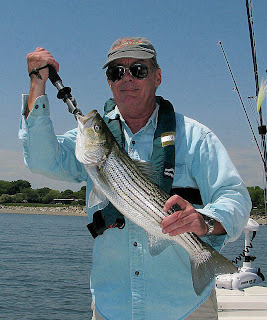 Mal Y. and I went out onto the Lower Housatonic River on Sunday.

This is rather an unusual day for me to go out...at least between Memorial Day weekend and Labor Day weekend...as it's the day that all the UselessCrafts take to the water. They churn their way up and down the River, burning fuel and paying no attention to what their boat wakes are doing. So, as said earlier, it's like fishing in a washtub out there.

But it was a day of decent weather that followed several days when either the weather stunk [see Fishing in the Fog from this blog on May 30] or the schedule didn't permit getting to the boat. So, it was off to the River, UselessCrafts or not.

Shoo-Fly 3 and the UselessCrafts weren't the only ones out on the water. A swan family had hatched out a brood of six chicks who were being taught the niceties of cruising down the River.

We also saw two kayaks come up the River, against the current, with apparent ease. These fellows didn't appear to be your run-of-the-mill-go-paddle-for-an-hour types; rather, they looked like traveling men...in long sea kayaks and with no fishing rods attached. One wonders, how they could spend so much time in contact with the water and not get the itch to catch a fish?

Perhaps under a hatch they had stashed a genuine Popeil Pocket Fisherman: "The biggest fishing invention since the hook...and still only $19.95!"

Yes sir, you can really slug it out with a big blue or bass with your Pocket Fisherman! 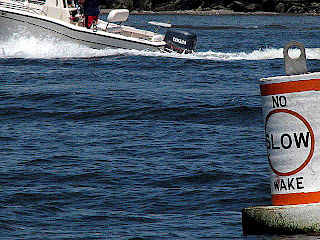 It's true that I do a certain amount of complaining in this blog about the drivers of UselessCrafts who disregard the no-wake zones. On Sunday I decided to photograph some of the idiots who were doing this. Caught "on film" about six of the 30-40 boats we saw ramming their way past the white buoys...as this shot shows.

It was interesting that a couple of the boats slowed down after they saw me taking their picture. Sure hope Tony Soprano wasn't running any of them [do you remember the episode where Tony takes AJ out in their monster UselessCraft and runs amok through the harbor?]. 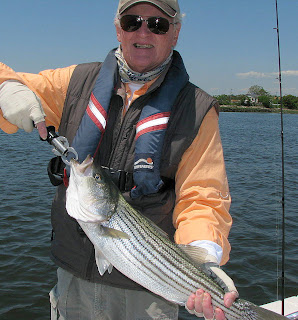 And, we actually did do some fishing.

Mal and I were both fishing similar lures but I caught the first fish...and the second fish...and the third fish...etc....until finally I handed over my rod to Mal; then he started catching fish while I went fishless.

There was obvioulsly something about the way the Bass Assassin plastic was working on my rod that induced the fish to bite.

A great day on the water.