Ospreys in the News

Shoo-Fly was on the water and we have a fishing report for May 6, but we left the camera somewhere and have to get it so can post the photos. In brief, we found stripers in the River, but not biting. Stripers also at the mouth of the River, biting.

Ospreys get attention in Fairfield 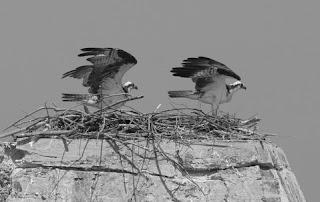 "Blame the fish parts and bird droppings on a pair of recent visitors — ospreys who built a nest in the 164-foot-tall cell tower looming over the Reef Road building.

“'One day, I was walking out and a fish head dropped down from the sky,' Sgt. James Perez says as he and Police Chief David Peck get a close-up of the hawk-like birds using high-powered binoculars.

“'They started building the nest about two weeks ago,' Peck says, and police officials initially considered ways to relocate the pair, who built their nest about 150 feet above street level. Environmental rules, however, prevented moving the ospreys." "SALEM, Ore. (AP) -- Utility workers suspect an osprey made a mess of its breakfast by dropping a fish on a power line, turning out the lights for folks trying to find their own way to start the day. Salem Electric workers called to an outage on the west side of the state capital Wednesday found a burned 14-inch fish beneath the line...."

Fairfield Ospreys to Be Evicted After All 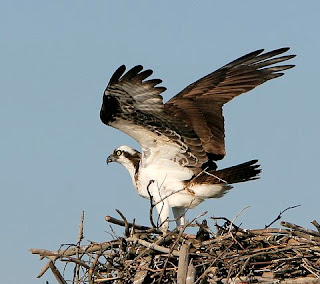 “The osprey nest built in a cell tower behind police headquarters will be coming down.

“Milan Bull, director of science and conservation for the Connecticut Audubon Society, inspected the nest Monday morning at the request of the state Department of Environmental Protection and found no eggs in it.

"’It's pretty much what we call a starter nest,’ Bull said. ‘A young pair of osprey are learning to set up housekeeping. Generally, the first year they may go through the motions of reproductive activity, but they don't follow through.’"