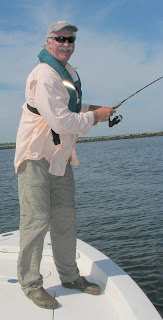 As explained yesterday, Don G. and Val S. joined me on Shoo-Fly 3 on Wednesday. Photo shows Don reeling in a keeper-striper which he promptly released after we took a photo...which will be in tomorrow's blog.

There were a lot of UselessCrafts out on Lower Housatonic River on Wednesday. Of course, the vast majority of these paid little heed to the no-wake buoys as, clearly, the rules don’t apply to them. Either that, or they’re just plain ignorant.

In addition, there were a couple of yahoos on Bond’s Dock, stripped to the waist, in an unfit condition to be fishing. They yelled to us that they were going to try to hook us, and then sent a cast in our general direction [must have been at least six ounces of sinker on it] that wasn’t even close…and then proceeded to belch a lot of unintelligible words at us.

Don’t know what set these goons off. We were way over to the east side of the channel, not at all in their fishing zone. They weren't exactly beligerant; rather, they seemed to think somehow they were having fun at our expense.

Just getting an early start on Memorial Day weekend, perhaps.

After one look in their direction, we just ignored them.

As to the weekend:

We’ll be off the water this weekend as all the owners of UselessCrafts will be taking their hulks out on Long Island Sound, barreling through the no-wake zones, and generally churning up the waters so that fishing becomes something akin to boating in a clothes washer.

If you fish anywhere near the mouth of the Housatonic you’ll get hit by one wake after another which, combined with the noise and smell of diesel engines, takes significantly away from the fishing experience.

So these boaters take their UselessCrafts out for the first time this year. Then their boats go in the docks for the rest of the summer and become floating cocktail patios. Then, on Labor Day weekend, once again they’ll stick their noses out of the marinas and venture out on the Sound…for their second and final trip of the year.

Ads on this Blog:

Sorry about the ad that appeared on this blog on Thursday morning. We have no control over the ads that are placed on the blog, except that if one appears that is objectionable, it can then be blocked by adding the URL to a listing….which I’ve now done. All ads placed on this blog by Google are supposed to relate to fishing. This is the first, and hopefully last time that Google will place an ad of that type on our blog.