So...although the fishing in the River had been non-productive, we did get in some good bird-watching. 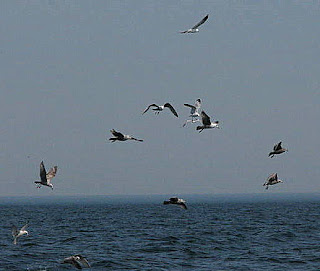 Arriving at the mouth of the Housatonic (where it flows into Long Island Sound [for readers who are not locals]) we puttered around the breakwater with no result. There were a few boats on the east side of the breakwater, hiding out from the wind, fishing the tail end of the winter blackfish season...ends on April 30. Didn't see them take any fish.

All at once hawkeye Charlie spotted a flock of gulls out on the Sound. They were diving...maybe on bait...maybe on bass?

We took off out there. 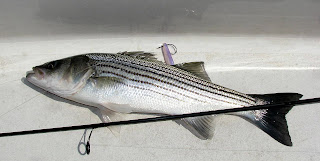 Sure enough, there were bass feeding under the gulls. We could see the splashes as the fish took whatever the foodfish they were feeding on [we couldn't see any bait in the water]. Most of the bass were down below, according to the Garmin, so that's probably where the bait was...except when some got pushed up to the surface by the pursuing stripers.

It wasn't a large school of bass, and they were well scattered...not bunched up, neither those on the surface nor those down below. But we managed to get the boat in front of them a few times so that the moving school would go right past us...and we caught some fish.

To my experience, in recent years a feeding school of bass, on the surface, in this area of the Sound, is a fairly rare event, and we truly enjoyed taking part in it. These were bright, shiny fish with lots of purple shading on their shoulders...possibly fish that have just moved into the area...maybe from the Hudson. No keepers...all fish caught returned to the Sound in good shape.

As the Bard said, "all's well that ends well," and this was a good end to a fine day on the water.

“…the data for the recreational catch of striped bass from 1995 through 2008. The number of fish caught by recreational anglers peaked in 2006. This includes both harvested and live release. Since that time it has dropped by approximately 50%. The catch in 2008 was the lowest since 1996….

“These statistics may well be harbingers of real danger for striped bass.”