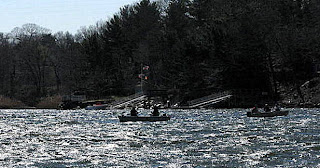 Good old NOAA [the federal agency that does the marine weather forecasts] zapped us again. The forecast was for 5-10 kts. As you can see from the photo, however, the wind was blasting right up the River. It was blowing so hard that with a fetch of only 0.5 miles it was generating whitecaps and 2-3 foot rollers. It was nasty out there. 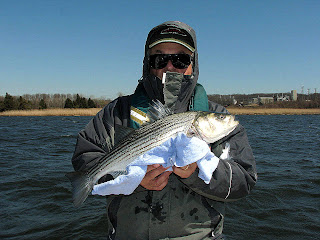 Val had hit Stratford Bait & Tackle on the way to the boat so he could pick up his Connecticut fresh-water fishing license—necessary if you're going to fish above the Merrit Parkway bridge, which we thought we'd be doing. But we never got there. We rounded a bend lower down in the River and found 8-10 boats stacked up over schools of striped bass. 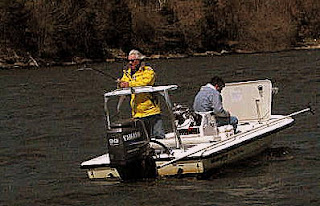 There were, unusually, several fly-fishermen on the boats...and from all appearances they were catching most of the fish. This included Capt. Jeff Northrop of Westport/Norwalk Islands fame. He was throwing a Jim Teeny 350 sinking line with a chartruese half & half fly on a 3/0 hook and landing some nice fish. Jeff's the premier salt-water fly-fishing guide in Fairfield County if not the entire northeast of the U.S. 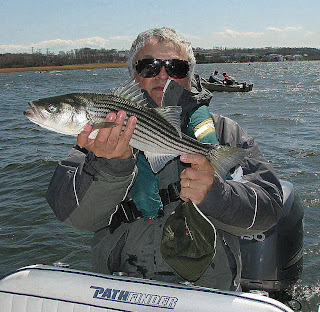 Val and I threw some flies but had no luck; we were both fishing sink-tip lines rather than full, heavy-duty sinking lines. Between the wind blowing the boat up the River, and the outgoing tide rampaging in the opposite direction, we were just not getting the fly down to the fish. So we switched over to plastic on jig heads.

I caught the first six fish and then Val started catching. He ran a string of 17 straight stripers before I caught another one. We were using similar lures on similarly-weighted jig heads, but he caught 18 of the 25 fish we landed. I'm always happy when a guest on Shoo-Fly 3 catches a lot of fish...but that was overdoing it.