0630: Did you remember to set your clocks ahead?

It's another beautiful day in Islamorada: 69° with a small-craft advisory in effect for east to southeast winds near 20 knots...decreasing to 15 to 20 knots late this morning. Seas beyond the reef 5 to 7 feet...subsiding to 4 to 6 feet late this afternoon. Seas inside the reef 2 to 3 feet. Nearshore waters choppy.

Re: Yesterday's Photo of the Parrot: Mal Y. writes from Florida's west coast, "Tell Coconut's owner to watch out. I read a similar case up here where a lady brought her parrot onto an outdoor patio and a hawk swooped down and took him for lunch!"

Not to lunch, but for lunch! 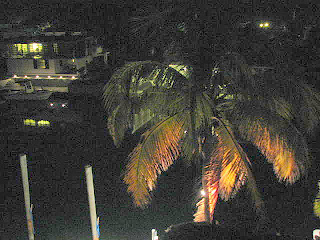 Small birds aren't the only critters that keep an eye on the skies. We discussed the feeding habits of ospreys a few days ago, and there are lots of other birds, including pelicans and kingfishers, that feed on fish here in the Keys.

Keys fish seem to find out early [recognize that fragment of lyric?] that shadows falling on them are cause for alarm. Don't know how many times we've been out on the water stalking the wily barracuda when a bird has flown overhead and cast a shadow on our prey. Mayhem ensues. Fish takes off like his tail's on fire.

This happens often because gulls have learned to hang around fishing boats. Some will attempt to grab your baited hook just as it lands on the water...even if it's an artificial bait. Others hope that you'll discard a hunk of bait that they can swoop down and scoop up.

It also happens often that birds fly into fishing lines and get entangled in them, or, if they pick up the lure, they can actually be hooked. This sort of thing has happened on Shoo-Fly only twice in the past...both birds were small and were released unharmed. Have heard stories of big birds being ensnared. Getting them free could be a taxing endeavor.

Wayne reports that he and Hanson went out on the water today. Planning to go hide from the wind in Hippie Harbor, they were zipping along in Hanson's boat when the motor when sour...running on less than the full complement of cyllinders. So the motor's set to go in the shop week after next.

Gordon and his friend Dave came over from the mainland for a visit today. We went to Smugglers Restaurant [never been there before] and got food to bring back to the house...clam chowder and fish sandwiches for Gordo and me, Caesar salad for Caryl, and a lobster bisque and a burger for Dave.

Smugglers is all right. Can sit out in the sun or under the porch roof while eating there...right next to the water and boats...just off Snake Creek. The food was not that wonderful, however. The soups were excellent, the salad was also good. Problem was the buns used for the fish sandwiches were thick and dry...and the fish was overcooked...wasn't exactly a generous piece of fish, either. Key Lime Pie rated only a 6.0 on the KLP scale.

So it's a mixed report on old Smugglers.

Maybe we have to give them another chance...next year.

Mentioning next year reminds me that we're down to our last week here.

That surely went by quickly.