You may remember, several issues back I mentioned the law that had been proposed in the Connecticut Legislature to allow commmerical fishing for striped bass. Apparently the calls you and others made had good effect:

Charles Walsh, writing in the Connecticut Post, says, "Although the effort to legalize commercial striped bass fishing in Connecticut's Long Island Sound waters fizzled -- thanks to Milford Rep. Richard Roy killing his own ill-considered bill before it got out of committee...."

But Charles points out that "...bass are threatened elsewhere. Illegal fishing for stripers is happening all along the Eastern Seaboard." Read his article in which he relates some recent arrests of striper poachers: Connecticut Post

Sunday was moving day. We moved from our first rental house in Islamorada to the second one...a move necessitated because the owner of the first house wants to come down here from Maryland each year at this time...and one can hardly blame him for that. The move went well thanks to Bridget and Shannon who did a great deal of the packing, loading cars, unloading and unpacking. 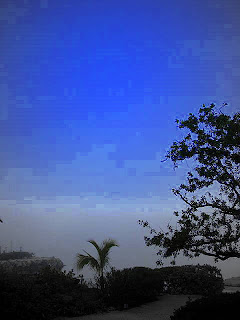 The morning started out foggy, foggy, foggy...and me facing having to run the boat from the old house to the new house. But the mariner's saying is, "fog before seven, gone by eleven." You can see from the photo that the fog was just at water-level...up above was blue sky...so the sun soon burned off the fog. The run in the boat went very easily. 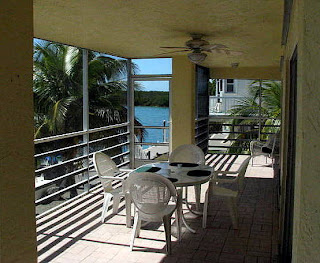 The new place is bright and cheery with nice views and a good breeze blowing through the house which is quite open. 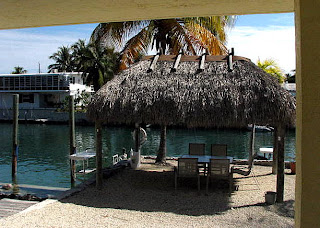 The lower level opens onto a patio, then the tiki hut, and then the dock; there's a rod rack for the fishing rods and it's all very convenient for getting stuff into the boat. 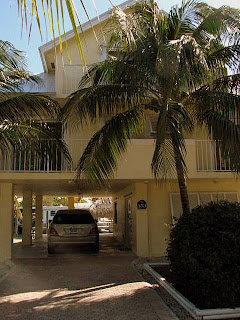 This view of the front of the house shows that it's three stories high. The main living area is on the second floor which also has two bedrooms. Third floor has two more bedrooms. You can see that there's a deck off each of the bedrooms on both floors. 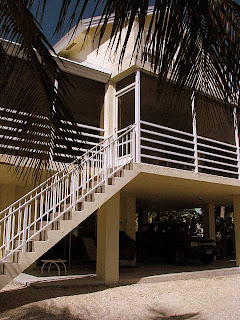 From the back of the house, a staircase goes from the screened porch to ground level. Access to the lowest floor and the fishing gear is through the slider behind the stairs. 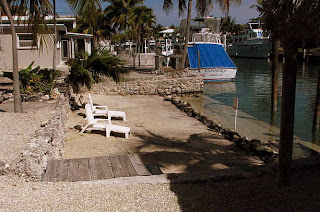 Off to the left of the tiki hut is the house's own, private beach. Not enough room for volleyball, but for those who absolutely have to have sand when they're sunning...there it is.

Hard to see in the pic [will get a better one tomorrow] just beyond the row of coral rocks, is a shallow area before the water falls off into the depths of the canal [can be as much as 30-feet deep]. Apparently all sorts of critters come into this little space at night. We'll report on sightings later.

Also to come, pix of the inside of the house.

Once the major unpacking was done, Bridget and Shannon went for a ride with me in Shoo-Fly: Out into Snake Creek, then out to the Ocean, then down to the Holiday Isle channel where dozens of boats were pulled up on the sandbar...partying. [Photo by Shannon.] But as these sandbar parties go, it was fairly sedate. Sometimes the boats are so thick one can just step from one boat onto the next...onto the next. We saw no obvious drunks...no nudity. Things can get much rowdier our there than today.

We went for a quick look at the sponge boats in Hippie Harbor and then back to the house...food...sleep. Was a very busy day. Somehow or another, we have to figure out how to avoid doing this move from one house to another for next year. Bridget and Shannon are our heroes today.