Another beautiful day in Islamorada: 0800, 71° and sunny with east to southeast winds 10 to 15 knots. Seas beyond the reef 2 to 4 feet. Seas inside the reef 1 to 2 feet. Nearshore waters a light to moderate chop.

Charles Walsh writing in the Connecticut Post, says, "A Tax By Another Name? -- Among the many fee hikes and increased license charges Gov. M. Jodi "No Tax Increase" Rell is planning in hopes of balancing the state's badly lopsided budget is a doubling of the price for a freshwater fishing license from $20 to $40. And that does not include the proposed saltwater license, which was to cost $20 for a season, but now, if passed, will likely be more.

"Quite soon to be heard at local tackle shop, 'Sorry kid, that's not enough money, why don't you go back home and play some video games?'"

"Connecticut Legislators and resources managers have three very important issues to deal with this winter, all of which have a significant long-lasting impact on fisheries and wildlife programs in this state.

"The most important is Governor Jodi Rell’s assault on the Natural Resources Division through her proposal to double all licenses and special tag fees then shunt that money into the General Fund, where getting it can be a tricky process that gets bogged down in politics."

SP: Sportsmen are less prone to complain about license fees when they know the dollars will go back into the environment, into increasing fish stocks, and into management of fish and game in general. Taking licensing fees and using them for other purposes, however, is likely to generate a good deal of hostility from the fishing community. 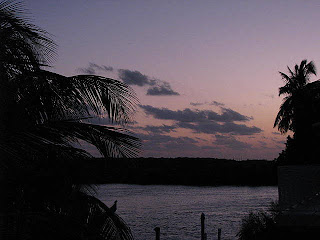 Have been trying to get some help from the local Visiting Nurse Association. They got approval from the doc, called us, and said someone would be in touch to evaluate the situation and let us know what services were going to be available. This was Tuesday. Wednesday, having heard nothing, we called and were told we were scheduled for the eval on Thursday...which took about 25 minutes of signing HIPAA notices and other releases,** and about 10 minutes of checking the wound site and taking pulse and BP. Friday an individual called around noon, tells us she can come to help only if the person is having a shower...which we'd already taken care of this morning. Then she says there're probably no services available over the weekend, but maybe they can give us three days next week. 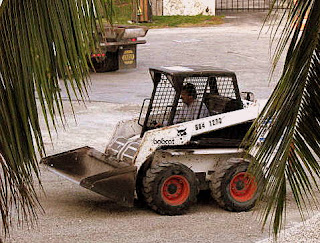 Friday morning at 0730 the construction crew next door was running a payloader up and down, scraping stones off the road into the yard...this went on for about at hour. Good thing I left the .380 at home. 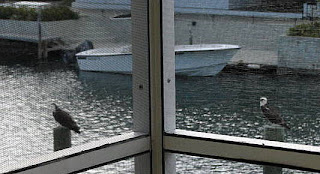 Two ospreys were perched on the pilings in front of the house Friday morning. The pair has a nest in the top of a Norfolk Island Pine located on the lot of the house next door. Guess they were taking a moment to relax by the water.

"The Osprey, sometimes known as the sea hawk, is a diurnal,*** fish-eating bird of prey. It is a large raptor, reaching 60 centimeters (24 in) in length with a 1.8 metre (6 ft) wingspan. It is brown on the upperparts and predominantly greyish on the head and underparts, with a black eye patch and wings.... As its other common name suggests, the Osprey's diet consists almost exclusively of fish."

**Most important thing, apparently, is that the agency covers its butt. However, a certain attorney has told me that such releases aren't worth the paper they're written on. Don't know how they could be. One gets this big, long, small-print document thrust under one's nose. If you're lucky, there's an X to show you where to initial or sign, and then it's taken away. Eventually you're handed a sheaf of copies that no one in his right mind is going to sit down and read. WTH?