Fly Fishing in Salt Waters [magazine] says, "It's official. The country of Belize has formally designated its stocks of tarpon, bonefish and permit under a strict "catch-and-release-only" status. Now the question begs: Could Florida be next? 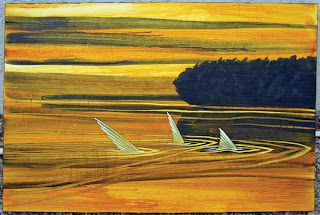 The painting above is by Tim Borski, an Islamorada resident [Wayne knows him...I've yet to meet him.] Tim is a renaissance man in the form of a fisherman. He paints, writes articles on fishing, and designs gorgeous fishing flies. This painting of bonefish tailing,* is oil on paper, 22x30", and titled "Out back." It was priced at $1,050 and has been sold.

Photo shows a Coast Guard boat out at the end of our canal...one of several stationed at the Atlantic-end of Snake Creek here in Islmorada. 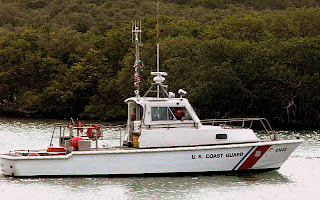 This particular boat is their 41-foot utility boat, the general workhorse for multi-mission U.S. Coast Guard units. It is designed to operate under moderate weather and sea conditions where its speed and maneuverability make it an ideal platform for a variety of missions. There are presently 188 operational 41 foot boats in the U.S. Coast Guard. The maximum range of the boat is 300 miles and the speed is 25+ knots. The boat has a crew of three (coxswain, engineer, crew member).

The Coast Guard is just one of five different agencies that police the waters around Islamorada. At any time you can also see boats from the federal Department of Homeland Security, the Florida Wildlife Commission, the Monroe County Police, and over in Everglades National Park, National Park Rangers. Last year we were stopped and checked by a Ranger and by a Police boat. So far this year nobody's thought we looked hinky** enough to bother with.

FOOTNOTES:
* "Tailing" occurs when the bonefish tip over on their noses to root crabs and other goodies out of the bottom in very shallow water. Their tails will actually stick up out of the water...and if the water's shallow enough, so will their dorsal fins.

**Hinky: slang for "suspect" or guilty-looking