It's another beautiful day in Islamorada: 0735: 68° with a small craft caution posted for northeast to east winds 15 to 20 knots and gusty. Seas beyond the reef 4 to 6 feet...except higher in the Gulf Stream. Seas inside the reef 2 to 3 feet. Nearshore waters choppy. 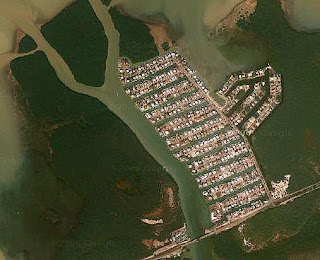 Here's an aerial view [from Google Maps] of the area where we're staying. The main feature is Snake Creek, the Y-shaped, river-like body of water that runs from the top of the photo, down and then under US-1 at the bottom. [Double-left-click to enlarge.]

You can see in the photo that there's a series of dead-ended canals running from the Creek to the right; we're in one of those tiny boxes on the side of one of those canals.

In the photo, the dark green is mostly mangroves and other vegetation; the lighter, grayish-green is water that will appear darker the deeper it is. 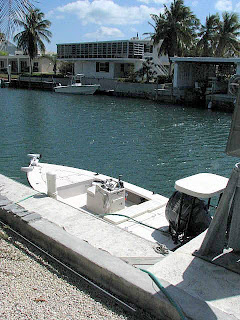 So to go fishing, we hop in Shoo-fly 2 and motor out to the Creek. Then, it's left under US-1 to the Atlantic Ocean, or right, out through the top of one of the Y-branches, to Florida Bay and the Everglades National Park.

Look closely at the top of the left Y-branch and you'll see a cut through the mangroves running to the left; there's another one on the right branch that you can just about see. We use these "ditches" as shortcuts, depending on where we're going. They're maybe 20 feet wide and 2-3 feet deep.

Snake Creek itself is about 10 feet in depth at it's deepest natural parts...however, there are holes, as deep as 25 feet, in certain areas near the canals where material was probably dredged out to build up the embankments upon which all those houses have been built. 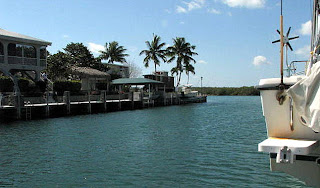 You'd never be able to get away with that sort of dredging and filling these days.

Hard to tell from the photo, but out on the far end of the canal, under those two palm trees, sits a caboose...on a section of railroad tracks. The kind of thing you'd expect to see at the end of a freight train. A real caboose! Don't know why it's there or what it's used for. Maybe an in-law apartment. Cool! They give you any trouble, roll it down the end of the track and into the canal!