It's another beautiful day in Islamorada: 68° with a small-craft advisory posted for east winds near 20 knots...subsiding to 15 to 20 knots. Seas beyond the reef 4 to 7 feet. Seas higher in the Gulf Stream. Seas inside the reef 2 to 3 feet. Nearshore waters rough...becoming choppy.

Our Journal staffer who went though emergency surgery over the weekend is doing well...up and enjoying the sunshine. Not ready for any bowling tournaments quite yet, but doing well. 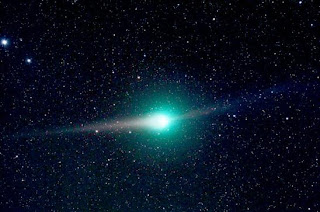 Comet Lulin: In case you're not aware, "There's a weird, double-tailed comet in the sky...the last week in February...and you can spot it with a pair of binoculars—even through moderate light pollution. A few people have even been seeing it dimly with their unaided eyes in very dark, unspoiled, rural skies. You'll have to know exactly where to look.... [THIS CHART] ...shows the starry scene about 9 p.m. this week.

For those readers who don't stay up until 9 p.m., above is a pic we took of Comet Lulin last evening with our trusty Canon Powershot.* 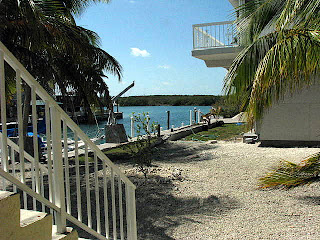 Interesting fact: No person in Florida is more than about 65 miles away from salt water.

That reminds me of a flight I had into Miami years ago: Plane was flying down the center of Florida...we were up high enough that if you looked out of a porthole to the left, you could see the Atlantic Ocean...while to the right we could see Florida Bay.

That same trip I flew from Miami down the whole length of the Keys to Key West in a small plane. I had asked the pilot which side of the plane to sit on for the best view, and as we were only a few thousand feet up, it was just a fascinating sight: Keys, water, flats, channels, boats, all laid out below in the sunshine. 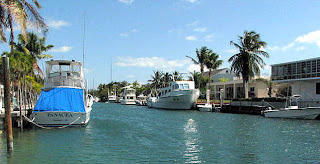 Another interesting fact: No person in this house is more than 65 feet away from salt water.

This is a northwards view of the canal on which the house sits. There are about a dozen houses on each side down to the dead end of the canal; most houses have at least one boat tied up in front. Those who really like toys will have a large boat, say 40-50 feet, a flats boat 16-20 feet, and a personal water craft or two, plus some kayaks that will be stacked up next to the house.

The large boat on the right side, bow facing us, is probably the biggest one in this complex of canals...somewhere between 80-100 feet in length. It was originally a working boat, perhaps a trawler; what it's used for now, I have no idea...never seen it move out of there.

Maybe it's an in-law apartment. Cool! They give you any trouble, just pull the plug!****

[*]Just kidding; we stole that off the Internet...same website as for the chart.