It's another beautiful day in Islamorada: Sunny and 65° with a small-craft caution posted for northeast to east winds 15 to 20 knots. Seas beyond the reef 4 to 6 feet. Seas higher in the Gulf Stream. Seas inside the reef 2 to 3 feet. Nearshore waters choppy. Isolated showers. 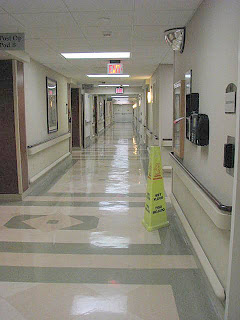 Last time we went fishing was...last Thursday? Time sure shifts around when you're spending it in doctors' offices, emergency rooms, surgical waiting rooms, and recovery rooms. One day blends into the next and, like that, four days have disappeared into the mists.
The important thing is that our Journal staffer is now back home and doing well...we're optimistic that it'll be a full recovery. 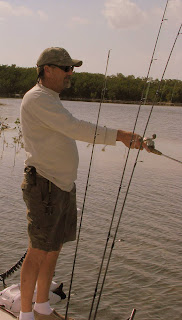 Here's Wayne flinging one of several assorted lures at the cudas last week. Man's a genius with a baitcaster. These reels use a revolving spool that the line peels off just as a hose comes off a hose reel. Using one of these is a real skill that most spin fishermen don't care to try. This is because the fisherman has to control the rate at which the spool revolves or else the spool will keep turning after the lure has stopped pulling line off it. This results in a "backlash" or "bird's nest" which can be very difficult to untangle. With spinning reels, on the other hand, line peels off the end of the spool which does not revolve...thus avoiding the dreaded backlash.

Kindly note that when fishing guides get one of these tangles on a reel, it's properly referred to as a "professional spool overrun." 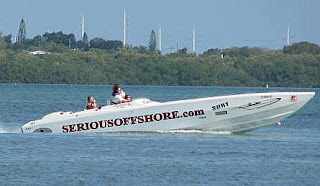 This is the latest thing in bass boats. It's especially effective when you want to cover a lot of water. Plunk this beauty down on your local pond and you can zip from one end to the other in about 8 seconds. 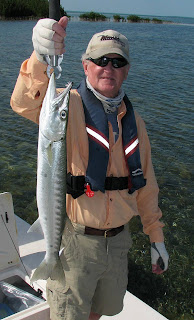 On last Thursday, I boated two cudas. Showed you one of them yesterday, and, having no other photo to pull out of the livewell, here's the other.

Wayne reports that he took a family fishing yesterday, a dad plus two children aged circa 10-11, and they caught a bunch of fish. At one time they had three bonnethead sharks on at the same time. Also got a bunch of jacks and sea trout.