It's another beautiful day in Islamorada: 0750: 70v with south winds 10 to 15 knots...then south to southwest and increasing to near 15 knots by afternoon. Winds turning west late. Seas beyond the reef 1 to 3 feet...building to 2 to 4 feet. Seas inside the reef 1 to 2 feet...building to around 2 feet. Nearshore waters a light to moderate chop...becoming a moderate chop. Isolated showers. 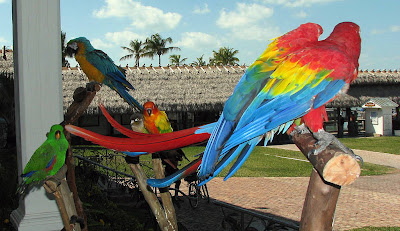 A fellow brings these birds to the World Wide Sportsman store every so often. They're a colorful bunch. Funny: When I took a flash photo of the birds, the large parrot in the right foreground turned to me and let out a loud squawk of complaint. Guess he's one of those stars that doesn't care for the paparazzi.

On Wednesday, Bridget and Shannon headed north to the mainland so they could drive up the Tamiami Trail and see some of the Everglades National Park.

I dealt with the COBRA requirements of the American Recovery and Reinvestment Act of 2009, the $787 billion bailout bill. "Dealt" means reading eight pages of small-print legalese and converting that into something a layperson can understand so Chris and I can tell our subscribers what they need to do about it. That was a lot of fun.

But then Wayne called and we decided to brave the 20-kt. winds and head out to fish. We had to find places out of the winds which were from the southeast; as a result we went into some areas that I hadn't seen before, and we found a new barracuda hole. 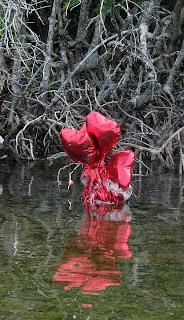 Much of the water we covered, as it was in close to the shore, was very shallow...we grounded out while drifting along a couple of times and had to get back afloat with the pushpole once. Lots of very clear water and eel grass...pretty water. You can get an idea of it from the photo; we have no idea what those balloons were doing on that dead tree at the side of the water.

Unfortunately, however, there were not a lot of fish, although we did catch a bunch of smaller barracudas. But eventually we moved to an area away from the shore, still out of the wind, behind a small key...and hit barracuda paradise. Don't know how many of them we saw...dozens...but it was a lot more than we got in the boat. We boated zero, in fact. We had hits. I had two big cudas on, one for about three minutes and another for about five minutes, but they both finally spit the lure back in my face...literally. When you've got the fish under pressure and the lure comes loose, the tautness of the line will spring the lure right back at you. Another good reason to wear sunglasses.

So, no cuda photos. But we'll go back there again and see about getting some of those rascals into the boat. 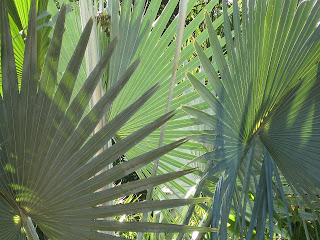 Bridget and Shannon [the palm photo's hers] came back from their Everglades expedition and reported they'd had a great time. Shannon got some excellent photos which will be in the Blog for day 46.