It's another beautiful day in Islamorada: 0810: 63° with a small-craft caution for northeast to east winds 15 to 20 knots and gusty. Seas beyond the reef 4 to 6 feet...except higher in the Gulf Stream. Seas inside the reef 2 to 3 feet. Nearshore waters choppy to rough.

I love the sound of Skil saws in the morning.

Interesting article: "Salt water covers 71% of the earth’s surface and provides 97% of its livable habitat. While the tropical rain forests have been called the lungs of the world, the oceans actually absorb far greater amounts of carbon dioxide. Microscopic phytoplankton in the top layer of the sea acts as a biological pump extracting some 2.5 billion tons of organic carbon out of the atmosphere annually, replacing it with 70% of the life-giving oxygen we need to survive. The top two feet of seawater contains as much heat as the entire atmosphere." Click to read the article.

On Monday, spent the morning doing the company eNewsletter, Issue No. 574. At 1 in the afternoon it was 76° with northwest to north winds 10 to 15 knots. From this house we can't see either the Atlantic or Florida Bay, so it's hard to tell what conditions are like out on the water. Coming back in the car from the bone-cracker's office, however, I could see whitecaps out on the Bay side.

Talked to Wayne. Linda was taking Natalie, Matt and the kids to the airport and Wayne wass doing maid chores...up to his 5th tub of laundry...so he wasn't available to fish. W and Matt were out the day before, Sunday afternoon, and saw dozens of permit, most of which were too arrogant to bite; but, he did hook one fish that broke the line. 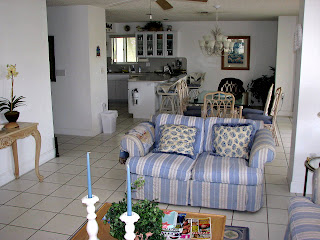 Promised you pictures of the inside of the house. This one is taken from the living area across the dining area to the kitchen. 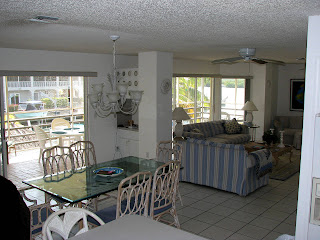 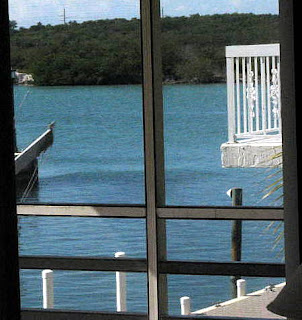 And, if you walk to the slider on the right in the photo above, here's your view out onto Snake Creek. 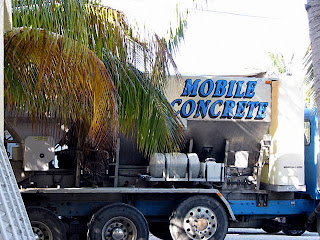 Here's a view we really didn't want to have. We saw on our look-see visit here Saturday that the neighbor to the south is doing some alterations on the house. It wasn't long after we got up this morning that this cement truck arrived and started pouring...with a great deal of hurrahing and comradery among those present to watch the operation. Readers who've been with us for a while may recall the year, at the other house, when the bulldozer arrived on the lot next door and began a clearing operation that went on for the better part of a week. Don't think the remodeling next door will be as rackety as that was...but we have to see...and hear.

Monday was Shannon's birthday [I don't know, you'll have to ask her]. She and Bridget took off to spend the day in Key West...see the sunset activities at Mallory Square, etc. Great thing to do on one's b'day...am sure they'll have all sorts of interesting stories to relate.

Sometime after 1400 I took Shoo-Fly out onto Snake Creek. Didn't go to the Bay as had seen the whitecaps earlier. Went out on the Ocean side and headed for the barracuda hole. Now am going to tell you about the secret lure; Deb and I discovered that the cudas really like a certain plastic lure with a white body and a red tail. Using that lure I got two cudas before they had chewed up all the white bod/red tail lures in the box. So, thought to use some reverse psychology. Had the same lure in red bod/white tail. Ought to out-psych those cudas, eh?

Reverse psychology is right: They wanted nothing to do with the red bod/white tail item. Took that off and put on all white...which the cudas deemed marginally satisfactory; caught two more cudas. Out of the total of four fish, three were pretty small, but the one in the photo was of a good size. He put up a strong fight...jumped clear out of the water and ran off line on the reel. All four fish released and swimming.

News Flash: On Monday, 16 FEB, this blog exceeded 100 hits for the first time. I realize that's not a lot compared to the number of hits at www.nytimes.com or at www.bikinis.com, but I appreciate that the blog is being read, even if by only 0.0000015% of the world's population. Thank you.