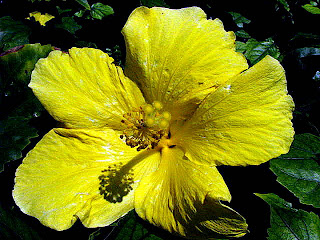 We spent the early part of the day Saturday doing preliminary packing for our move to the other house. By early afternoon things were in pretty good shape thanks to Bridget and Shannon lending a hand. 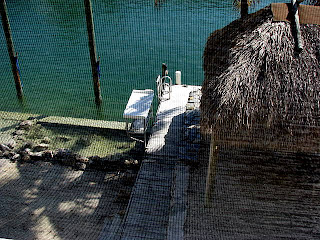 We went over to the new house to see what household items we might need before moving in...the owners had thought of about everything and had left enough paper towels, detergent, and so on so that we'd be able to start off our stay there without problems.

This photo looks sort of funky because it's shot through the screen on the porch on the main floor. The porch looks down on the canal; as you can see, there's a small beach area, a tiki hut, and a fish-cleaning station. The canal is a dead end a dozen or so houses down to the left, but two houses to the right it opens out onto Snake Creek which is one of the waterways that flow between the keys, linking the Atlantic Ocean and Florida Bay. We'll tie Shoo-Fly to the dock right in front of the house and have easy access to both bodies of water. 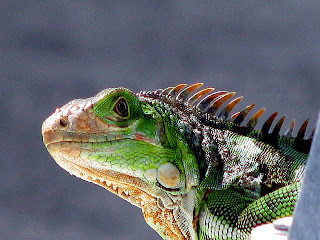 Seems that at least one of Iggy's cousins lives at the house. We saw one scoot up a palm tree, and then this guy stuck his head out around a boat stanchion. Handsome rascal, isn't he! 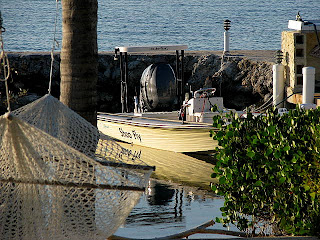 So Saturday was Shoo-Fly's last night in her cozy little boat basin. Today we'll load her full of the fishing gear and other stuff and zip over to the new house.

One difficult aspect of the new place is that boats motor up and down the canal all the time. Although they're supposed to go slowly so as not to throw wakes, their movement still creates wakes which can bash boats up against their docks.

There's all sorts of elaborate gear to protect the boats such as davits, fenders, barge boards, and so on, but there's no easy way to fender-off Shoo-Fly as there's no place to hang a fender [inflated plastic balloon] off her overhanging gunwales. This means the fender has to go on the part of the dock against which the boat rests...in this case, three steel pipes driven vertically into the bottom of the canal [in the photo with the tiki hut, you can see one of these pipes (white) in the background]. So, I've bought a three-foot long strip of protective material that I'll tie to the center pipe and see if that will offer enough protection.

I know this is more than you want to know about this, but it's been on my mind.

Wayne and Matt fished Saturday afternoon...saw permit and tarpon, but no takers. 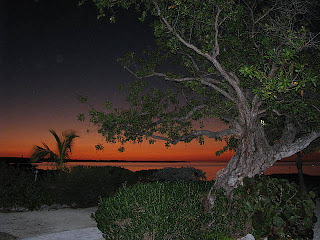 Saturday' evening's sunset may be the last one we'll photograph as the new house may not have a view of the western sky.