The plan for Thursday was for Wayne, Matt, and me to fish. Linda and Natalie [who is Wayne and Linda's daughter and Matt's wife, and a professional singer] would bring the kids, Theo and Sydney, over to our place and do some snorkeling and generally have a nice time.

All of that happened.

On the fishing side, we three gents lit out for Everglades National Park and found that water temperatures had migrated up into the low 70s; in addition, there was no wind. Repeat: there was not wind.

Ideal conditions for hunting the elusive permit in shallow waters.

Indeed we saw a number of permit and had shots at several ["shots" means we were able to make casts to them], but had no takers. However, there was a surprise when one of the permits turned out to be a tarpon...and he did take the bait...a live crab in this case. 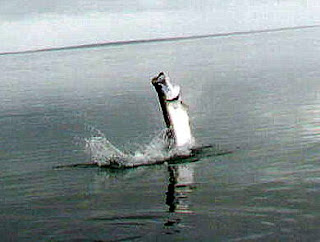 Not only was it a tarpon, but also it was a huge tarpon. 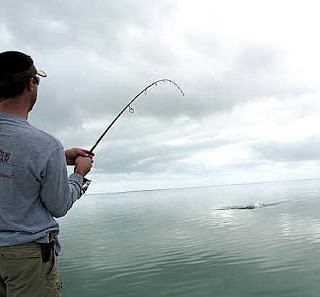 Wayne made the cast and hooked the fish, then handed the rod over to Matt who fought the beast for 55 minutes. The fish finally tired and it looked as though we'd be able to bring it alongside for a close-up photo. But the fish did a roll alongside the boat, got the leader across the side of his head, and broke off the leader which had been severely abrainded by the fish's rough scales and gill plates. 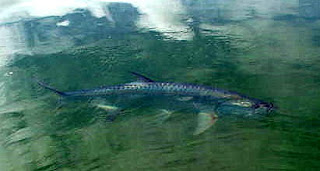 It swam off in good shape...probably in better shape than Matt was after nearly an hour of battling the fish. Matt's shirt was soaked and his forearms ached.

We estimate that the fish might have weighed 120 lbs. I mean, the darned thing was towing the boat around in circles. Strong, strong animal.

Of course, it would be nice to have gotten the fish alongside, lift it out, and get the usual photo. However, Florida law prohibits removing the fish from the water unless the angler has purchased a tag that allows him to do what he wants with the fish. Whipping the fish to a standstill and then pulling it out into the air takes an enormous toll on these fish...and we would never want to kill one.

The neighbor next door tells me the guides down here are cutting the leaders on the fish and letting the tarpon swim off...just so the fish doesn't have to be totally exhausted. The tarpon are too valuable to endanger.

Former President George H. W. Bush was recently called to task for improper handling of a tarpon. [Click here to read the story.] 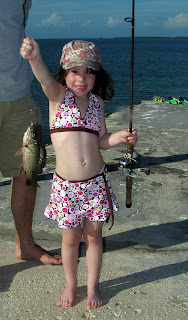 Back at the house the gang had lemonade and cupcakes to celebrate Theo's upcoming birthday, and a fun afternoon which was capped off by catching a couple of snappers off the end of the basin wall [all returned to the water safely]. 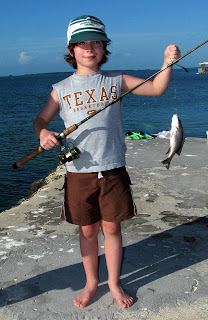 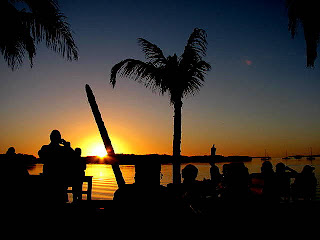 Later, Bridget and Shannon and Caryl and I went to the Lorelei for dinner. The place was hopping, and not just with the bar trade. Guess the combination of the first day in a week when it would be comfortable to sit out on the beach and eat, plus a lot of people getting an early start on the three-day weekend, combined to fill the restaurant's parking lot. Still, we got a table right off, ate lots of good, local fish, and pronounced the Key Lime Pie a 10. If there's one better than this KLP, we haven't found it.