It's another beautiful day in Islamorada: 71° and there's a boating advisory in effect for boaters who may have a heart attack when they learn that the winds may actually be less than 20 kts. today: Southeast winds 10 to 15 knots. Seas beyond the reef 2 to 4 feet. Seas inside the reef 1 to 2 feet. Nearshore waters a light to moderate chop. Isolated showers.

My heart be still! 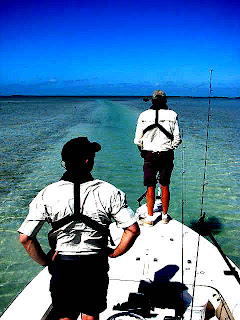 Yesterday, Wayne, Matt, and I went into Everglades National Park to find fish...without a great deal of luck. The wind was howling. We hid behind keys, behind sandbars...to little avail. Net catch was one small barracuda. We did see a number of sharks and large cudas, but they weren't interested in such goodies as pinfish and shrimp, never mind artificial baits.

The photo of the boat shows us in a ditch that runs through an enormous sandbar. By taking this 200-yard-long ditch we probably save a mile of motoring around the bar. The ditch in the photo is hard to see, in part because it's so shallow and in part because it's hardly as wide as the boat. It's that greenish streak between Matt [foreground] and Wayne that runs off to the horizon. We snuck through it on the trolling motor on the way out and then ran it full speed on the way back. 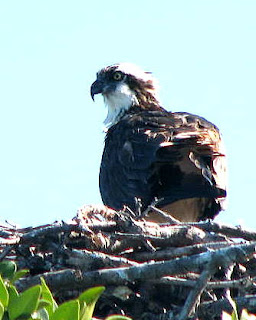 Lady Osprey has quite the nest at the top of the mangroves. 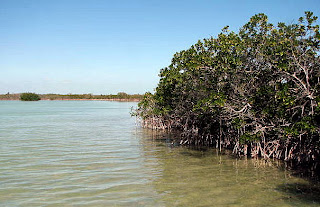 A view of mangroves coming up out of shallow water. Fish, especially snappers, lie right in among these roots, making it hard to get a lure in to them. 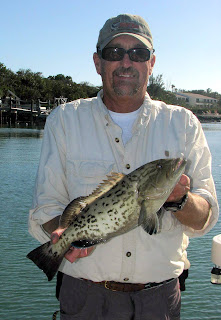 After coming back to Islamorada over "back-breaker bay," [it has other, similar names that rely on referral to other parts of the anatomy] we fished in a spot right off our dock and got into a mess of snappers. Wayne also boated this grouper. All fish returned to the water.

Matt said, next trip Wayne and I can take off in the boat and just leave him at the dock. 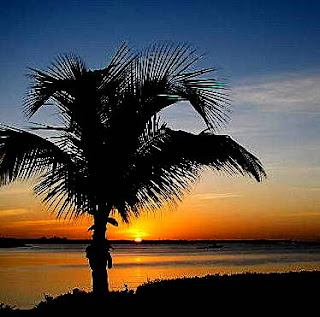 Just spoke to Wayne. We're fishing again Thursday, hoping for gentler winds. Marine forecast is for 10 kts. and 76°, but we'll have to see.

Bridget and Shannon to arrived last evening; they made it to the Keys in two days of driving.