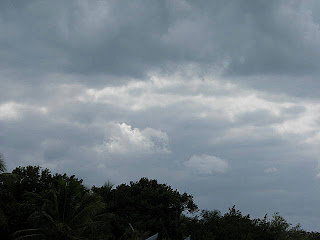 Another beautiful day in Islamorada: Totally overcast, currently mid-60's, small-craft advisory in effect for northeast to east winds near 20 knots and gusty. Seas beyond the reef 5 to 8 feet. Seas higher in the Gulf Stream. Seas inside the reef 2 to 3 feet. Nearshore waters rough. 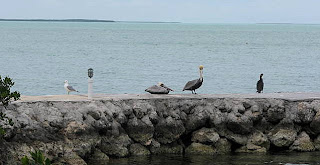 Holiday Isle is a local hotel/marina/party place that has a beach open to the public; Sarah and Hank have gone there to the beach each time they've been to Islamorada. The news that HI was going to be condo-ized was not well received as public access to the water would likely have been curtailed, so there are certainly folk who will, as Hank says "...jump for joy, and yell out, 'yippee!'" at the news of foreclosure. Now, of course, the question is whether or not the place will continue to operate at all.

Photo above: Gull, pelicans, and a cormorant all hanging out together, trying to figure out where to catch a meal when the water temperature is so low that all the fish have lit out for the Bahamas.

Pythons in the Keys: A "...task force of patrollers and responders is fighting an invasion of Burmese pythons into the Florida Keys, first discovered in April 2007 on Friday the 13th. The Burmese pythons have swum more than 6 miles to the Florida Keys from Florida's Everglades National Park — infested with a population of more than 10,000 snakes. The problem started more than 10 years ago because of a few released pets." Source: The Nature Conservancy 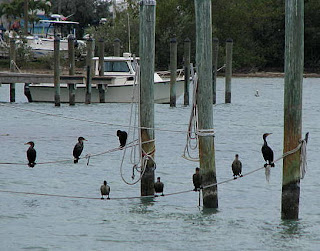 Roy P. writes that he heard they also had a problem with snakes in the Garden of Eden. I responded that may be true but I bet they weren't freezing their butts off in the Garden. Also, these winds would have made it impossible to keep those leaves in the proper position.

Photo: These cormorants have decided they'll fare better if they run away and join the circus...here they practice their high-wire act.