A Connecticut State Representative, obviously ill-informed, has proposed a bill, HB5506, that would allow commercial fishing for striped bass in our state. "Be it enacted by the State and House of Representatives in General Assembly convened: That title 26 of the General statutes be amended to declare striped bass a predatory fish that is harmful to other species and to allow commercial fishing to take a limited number of striped bass using conventional tackle, but not by use of purse seine nets or similar equipment. Statement of Purpose: To help balance the diversity of sea life in Long Island Sound.” Click here to read more. Readers who know what sheer idiocy this proposal is [that means anyone with an IQ of 27 or more] should write to their state reps and tell them what they think about this bill. I, for one, would point out that there's absolutely no research that supports the idea that killing striped bass and then selling them in the marketplace is somehow or another going to "balance the diversity of sea life in Long Island Sound."

6 pm: Not much to report today. Cold...temperature eventually got up to maybe 56°. Windy...although winds have dropped off to maybe 15 kts late afternoon. Miami Beach hit 33° last night and it got to 14° up in Tallahassee [that's fourteen]. Tomorrow will also be cold, but perhaps a few degrees higher.

I did the food shopping today...Winn-Dixie. Also stopped off at the Cuban place where they have excellent roast chickens, good rice & beans, bread that's out of this world, and flan. You probably know that flan is the Cuban/Puerto Rican equivalent of my grandmother's custards and creme brulee [crème brûlée for anyone who's fussy about accent marks]. Doesn't come up to Nana's custards, but it's good stuff...and no calories and no fat.

Other exciting thing today is that FedEx showed up with the new G. Loomis spinning rod to replace the one that Don G. gave me that got broken. What a beautiful rod! I put a reel on it and went out in the winds to see how it throws. Nice!

Just saw a boat go by out in the bay...first one I've seen today.

Finished reading Follett's World without End, his follow-on to the Pillars of the Earth. The two best novels on medieval times I've read. 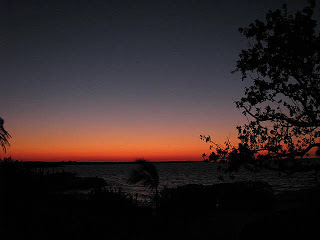 Tonight's sunset had a bit of color in it.