It's a beautiful day in Islamorada: At least it started out that way. Up until noon today it was sunny and cool with no wind...repeat...no wind. We shoulda fished...but I had to get to the chiropractor as my sacro-illiac joint was doing whatever it is that it does, and Wayne had to have his truck towed as he was unable to start it. So we didn't fish in the morning.

Come afternoon, Wayne, Hanson, and I finally left the dock about 1 pm and headed for the barracuda hole. The wind was just picking up a little bit of speed.

We saw a bunch of cudas. I hooked three and landed the smallest one of the bunch. The other two cudas were on the hook...and then they were gone. Wayne and Hanson were 0-0-0. [Deb: I used the secret lure!] 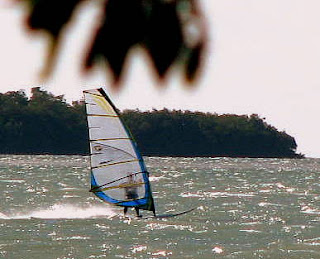 We noticed that the wind was getting stronger, so we headed back to bayside. Coming through Snake Creek, we could see that the winds were now up to about 25 kts. We beat it back to the dock and managed to get into the basin without scraping the boat on the coral/cement walls thanks largely to Wayne doing a tightrope act on the bow of the boat and fending off the walls with the pushpole. The wind was blowing so hard inside the basin that we missed the dock on the first try [I missed the dock on the first try] and we had to come about and go at it again...from further upwind. 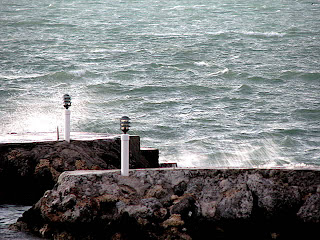 Now am sitting here typing and watching whitecaps, and waves smashing on the basin wall...and listening to the wind howl around the house. Temp is probably in the high 50s and is going into the 40s here in the Keys tonight...30s in Dade County which includes Miami.

Thank goodness for global warming. Without it we'd be snowboarding down here.

Here's the marine forecast for the next several days [keep in mind that once the wind hits 20 kts. going fishing then becomes something between uncomfortable and impossible]: 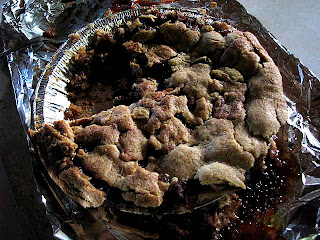 Went over to Hanson's to see what had developed with Wayne's non-starting truck. Linda had arrived in their other vehicle to pick up Wayne, but it turns out that what was wrong was that the chip in the truck's ignition key had died! This also happened to me a while back; I remember the mechanic asking if by any chance the key had been in a pocket and gone through the laundry. That didn't happen, but I've often wondered if you leave your computerized key on top of a tv, or in the same pocket with your cell phone, could either of those zap the chip?

Government should spend a few million of our dollars researching that.

Wayne and I researched a piece of Hanson's home-made apple pie and pronouced it worthy of further funding. 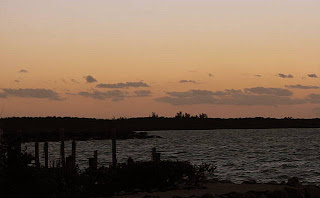