It's a beautiful day in Islamorada: But very strong winds coming in from the west, which means they're blowing straight across the Everglades National Park right up against the back of the house. 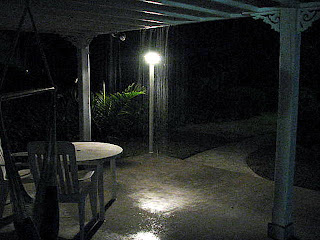 It rained very hard last night. How hard was it? [Thanks for asking!] It rained so hard that the sound of the water beating on the roof drowned out the audio of the television. Lots of lightning and thunder; in fact there was a distant but very loud clap at which point the local classic rock station's broadcast turned to static...something got fried...but they were back up this morning. None of the lighting strikes were close to this house, but Wayne said there was one clap up in Key Largo that shook his home.

Caryl called at 0745; she got to the airport before the snowstorm that's supposed to come in, so it looks as though her flight will be off on time. I left the house shortly after 0900 to head for the airport to retrieve her. 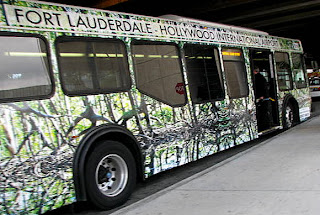 Writing at 6:30 pm: It was an easy run to the airport; I arrived early having allowed for traffic jams that never took place; naturally, Caryl's flight was delayed. Time allowed for me to walk from terminal 1 past this bus to terminal 2 where I could get a decent cup of decaf coffee. Still had to hang around for her plane to land.

Caryl finally came up the ramp into the terminal; our trip back to the Keys went smoothly. The Miami area does seem to be populated with more than the usual number of race-driver wannbes who take out their frustrations on the highways. Trick is to see them coming in the rearview and stay the heck out of their way. 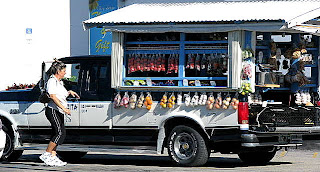 Back in Key Largo I spotted this truck...sort of a vegetable stand on wheels. The name on the truck is "La Placita." Not entirely sure what that means; however, not being one to let ignorance stand in the way, I'll opine that it may mean "little market" or words to that effect. 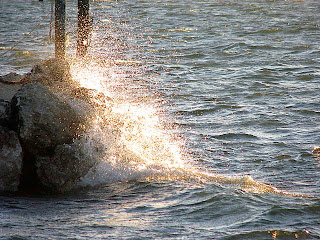 Back at the house, Wayne stopped by to say he and Hanson had fought their way out to the lee side of Islamorada where he'd caught a nice barracuda. He said there were lots of boats out on that side...with the wind the way it was on our side of the Key, they sure as heck weren't going to be fishing over here. 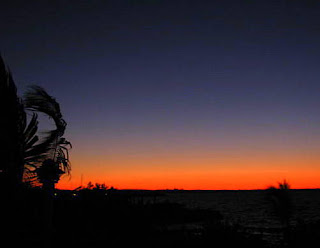 Tonight's sunset wasn't much to see; all the clouds and dirt were blown out of the sky by the west wind, but there was some color right along the horizon. Perhaps you can see how the palms are being blown on the left. 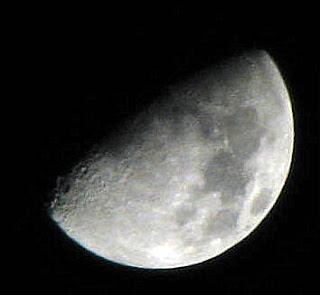 But the clear skies allow us to see Mr. Moon. A number of readers enjoyed the pic of him the other night, so thought to include this one taken tonight. As you can see he's now more full...perhaps even a bit beyond the half-moon stage. Hope we get a clear night for the full moon.

Tomorrow promises to be clear and cool [mid-60s] with northwest to north winds near 20 knots and gusty. Seas beyond the reef 5 to 8 feet. Seas inside the reef 2 to 3 feet. Nearshore waters rough. Oy vay!