Beautiful day in Islamorada: Forecast is for 80° with winds only 10 kts.

Sitting at the computer this morning, heard a squawking outside and saw Great Big Harry, the Great Blue Heron [GBH] chasing Egbert the Egret out of the basin area. Apparently GBH considers our boat basin to be his private fishing preserve.

Iggy the Iguana was out sunning his butt on the basin wall [remember, Iguanas got their name 'cause they always say "Iguana beer"], so Iggy may be nursing a hangover. 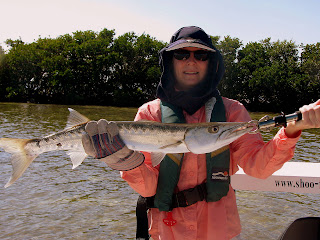 Deb has only two days left here [that went by fast!] so we checked the weather to see if we should fish today or take a break and fish Friday...but, the weather'supposed to go downhill...so we decided to fish today and if it's soggy tomorrow, there's always the BassPro Shop...and reading. 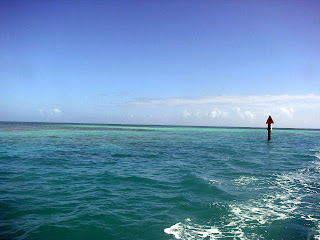 We went to Smuggler's for gas and got to see Mark there who has fished with us in previous visits to the Keys. Then we headed out on the Oceanside where the colors of the water were amazing...the photos do not show how spectacularly beautiful the water is: greens, blues, and all shades in between. 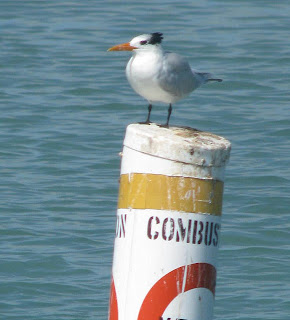 We hit the barracuda hole where Deb had dozens of follows from the local 'cuda population...while I couldn't get one to take a look at my bait. The plastic jig Deb had on just fired up the fish whereas the more bland-colored item I was using didn't do it for them. First photo above shows the result. 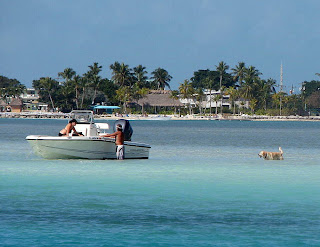 Deb had about a 10-minute battle with this toothy critter. She finally got him alongside the boat and we held him in the water while getting the camera ready. Pulled him out for the shot and got him back in right away. Cudas are tough critters in the water, but they'll expire quickly in the air. We wiggled him back and forth in the water until he regained strength...he swam off. 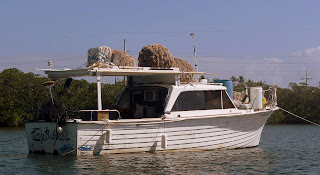 We ran the boat down the oceanside and into the Holiday Isle channel where we saw the gull with the tonsure and the couple with the dog...who seemed to be loving the sandbar. Then we motored over to Hippy Harbor to check out the residents thereof...mostly seem to be spongers. How they make a living collecting and selling real sponges is beyond me, but there must be something to it. 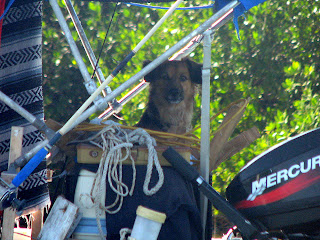 The spongers work off small boats, rowboats, with small outboard motors. They stand on the foredeck with a pole that they use to grab the sponges which they throw in the rowboat. They then bring their "catch" back to the mother ships...one of which was guarded by this dog. 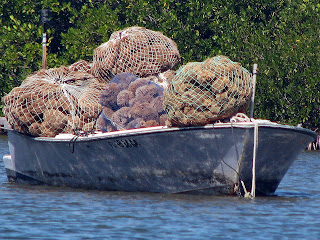 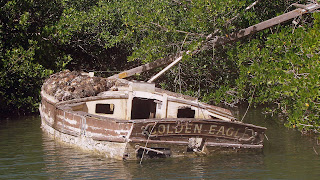 This boat seems to have made it into, but not out of Hippy Harbor. 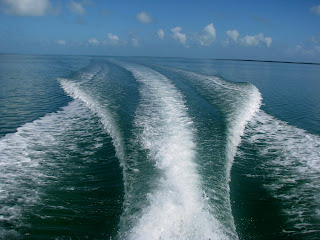 We went over to the Lake to try to spot some dolphins without luck. Disappointed, we headed back in and just as we were about to cross the last sandbar, two of the rascals showed up. They played in the bow-wake for a few seconds, but they were obviously into more important stuff, so we said "goodbye" and headed back to the dock. 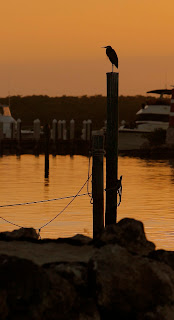 This evening there was a huge grouper, maybe 40-lbs., right off the basin wall at the house. 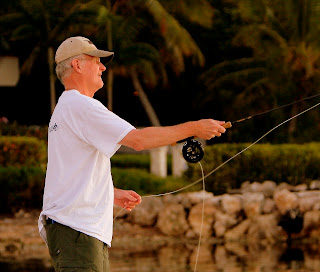 I tried to interest the local cuda and snapper population in falling for a flyrod popper with no result. 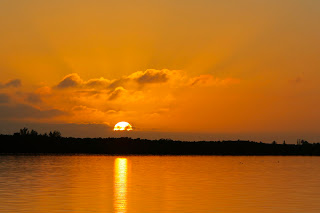 Here's Deb's photo of tonight's sunset. Yellow sky may portend ill weather, but that can change in an hour down here.