Beautiful day in Islamorada; it was actually hot when the wind slacked; forecast was for 76° but it certainly got into the 80s. 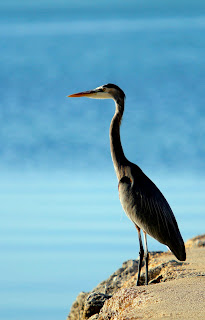 Deb says she was getting closer and closer to this Great Blue Heron that was out on the basin wall this morning...take a step...take a photo. This was about as close as she could get before... 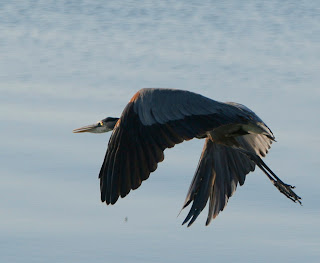 ...the GBH took to the air. Isn't this a remarkable photo? Look at how sharp the bird's eye is. You can double-left-click any of these photos to enlarge them. 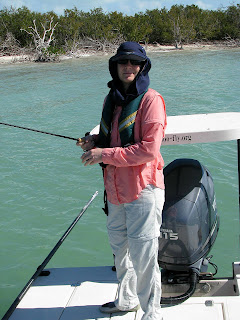 On such a nice day we had to go fishing.

All the clothing Deb has on is mostly to keep the sun at bay as it was warm even out on the water. I never put a jacket on all day, even when running the boat. 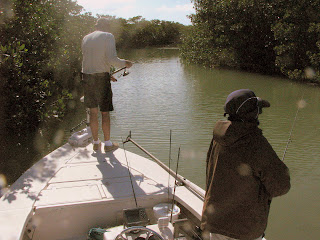 Many of the photos we show you in

are open water, but that's not typically where we fish. There are all sorts of "ditches" that run between sandbars and between the mangrove keys...it some cases they seem to cut right through a key. These ditches can be substantially deeper than the waters they flow from and flow to...apparently carved this way by the need for the tide to run toward and away from the ocean.

Ditches such as this one can harbor all sorts of fish in among the mangrove roots. [Sorry about the water splotches on the lens.] 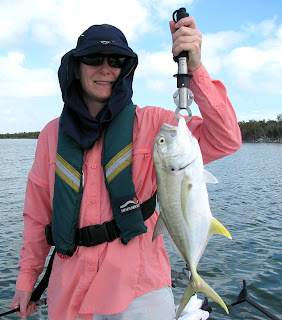 We caught several Crevalle Jacks. Funny thing is that these fish have historically been called Jack Crevalles; however, as all other jacks have the "jack" part of their name pronounced last [horse-eye jack, green jack, bar jack] the word was put out to fisherpersons to change from Jack Crevalle to Crevalle Jack. [This is probably information you could have lived without.] 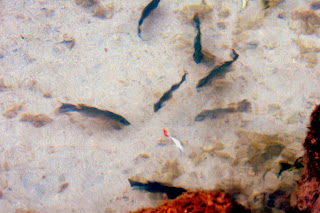 Back at the house, I was trying to interest one of the snappers off the basin wall in biting the white/red lure you can see in this pic. They all gathered around, daring one another to take a bite..."you do it Sammy, c'mon...don't be chicken!" None of them bit. 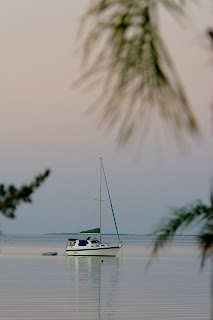 Deb' shot of a sailboat anchored just a few hundred yards from the house. 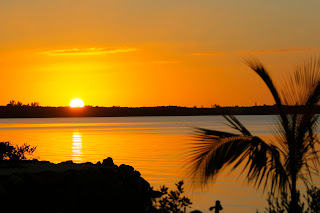