What's the Truth about the Status of the Striped Bass?

Stock Is Fully Recovered: [Vineyard Gazette Online] “Today the striped bass is one of the great conservation stories in the last quarter of a century. Indeed, the recovery of the striper may be one of the only hopeful developments in the Atlantic fishing industry which has been in a depressing state of collapse for the last decade, decimated by years of overfishing and political gridlock among fisheries regulators.

“Twelve years ago federal marine fisheries officials declared the striped bass officially restored, calling for a widespread relaxation of the stringent conservation measures that had been in place for a decade.” 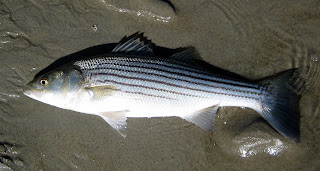 Stock Is in Big Trouble:
"But there is a troubling trend afoot, which can be seen in both the scientific data from our Department of Natural Resources and observations of many fishermen along the coast who for decades have followed striped bass trends.

"First the anecdotal: Friends who fish up and down the striper coast, particularly in New England waters, have in recent years noted the absence of the big breeders. Also, for several years there has been disturbing “dock talk” detailing the deeds of miscreant sport anglers who fish outside the legal boundaries, catch more than the legal number of fish and even “double dip” – catch their legal limit, sprint to the dock where they dump the striper in a cooler in the truck and head back out.

"This is more than idle talk—I’ve seen it happen on a few occasions, and have heard it from reliable sources." [Article no longer available from HometownAnnapolis.com.]
Posted by Len at 00:01