Fishing Editors Sign-Off for the Season

It's a sure sign of the end of the fishing year when the fellows who write about what's going on out on the waters stop sharpening their quill pens and put the stopper back in the ink bottle.

Yet, Charles Walsh of the Connecticut Post is still penning his column which appears at the end of the Sports Section each Sunday. If he stops, the only reason I'll have left to purchase that paper is to read the obits. 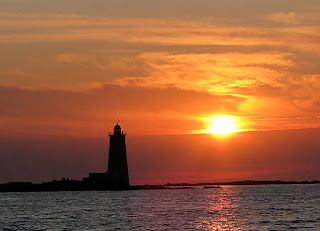 Who was it who said...he gets up each morning and reads the obituaries, and if his name isn't listed, he gets on with the day; Twain? Mark Twain is famous for the line, "The reports of my death have been greatly exaggerated," when his obit appeared before he had died. And Clarence Darrow's, "I have never killed a man, but I have read many obituaries with great pleasure," also strikes a note, but I don't know who said that first line.

Well, we got a bit off course there. Here are three sign-offs:

Tim Coleman, New London, CT: "And, with that folks, we wrap up another season, closing down this report for the winter. God bless, good luck or may the force be with you. Have a nice holiday season and we'll see all in the spring."
The Day

Ken Almeida Plymouth, MA: "As you’ve probably guessed by now, this will be my last article for 2008."
Wicked Local Plymouth

Marc Folco New Bedford, MA: "This is the last Catchin' Anything? weekly fishing report for the year. Thanks to all the tackle shops, charter/party boat captains, skippers and anglers who contribute throughout the season. This report will resume the first week of May."
SouthCoastToday.com

So, we can only hope that next spring our names will not have appeared in the obits. Once again the columns will be printed. Once again the fish will be there for the catching.
Posted by Len at 00:01