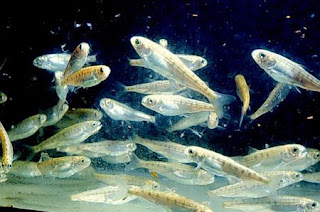 "The Kensington hatchery is among seven in New England that raise salmon in programs coordinated by the federal Connecticut River Atlantic Salmon Commission. All told, the states in the program stock 9 million salmon fry each year in New England rivers and streams."

"In Connecticut, the goal is to establish an annual spawning run of at least 4,000 Atlantic salmon, the minimum number fishery folks say is required for high-quality sports fishing. But the numbers of fish returning to the Connecticut River from feeding grounds off Greenland remain small."

Read the article at: Hartford Courant
Posted by Len at 00:01