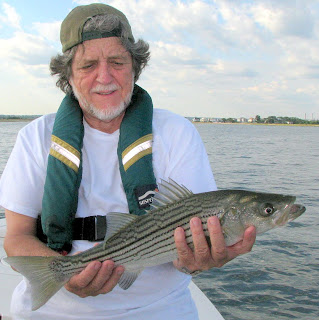 The bite was pretty much continuous…I doubt that we ever made more than 5 casts in-a-row without a hit…but the fish were not schooled up; they were more like marauding gangs that would turn up here…and then over there, but always so close that we never had to motor to them.

Charlie got a couple on flies but we caught most of them on jigs with plastic and on poppers cast on spinning gear. We had several cutoffs…even with 40-lb. shock leaders; I lost so many fish that bit through the leader that I changed to a wire leader…which seemed to reduce the bite somewhat, but also effectively stopped the loss of jigs. 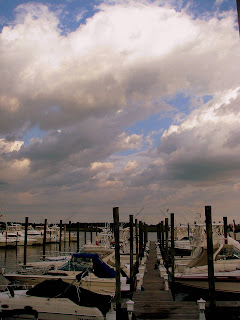 When Charlie started catching on surface poppers, I cast out my jig/plastic combo and started reeling it as fast as possible, keeping the lure on the surface. The fish whacked it as hard as they hit Charlie’s poppers.

The clouds were spectacular this afternoon…looked as though one of the Impressionists had been up there wielding paint from palette.
Posted by Len at 11:18