The Importance of An Oily Little Fish

The Connecticut Post of 29 August said, “Sun sparkled on the harbor. But the water's calm surface was dappled with white spots, and they weren't water lilies. A closer look showed a slew of floating, filmy fish—belly up…the fish—called menhaden, or more colloquially, bunker—likely died of oxygen deprivation, experts said…the dead fish could also be attributed to an annual bluefish tournament…guys try to get the menhaden with nets...A lot of the menhaden get missed and ripped up." 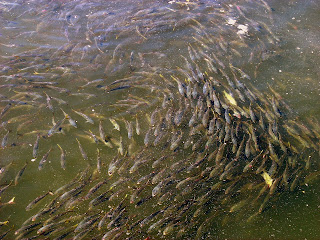 After reading this it became clear that we desperately need to form an organization to protect the menhaden from the depredations of hypoxia and human avarice. Accordingly, we announce the formation of “Save the Menhaden” [STM]. The goals of this new, not-for-profit charitable group will be: [1] Protect the menhaden from hypoxia… At the first sign of oxygen-deprived schools of bunker, STM volunteers will rush to the harbors armed with lengths of garden hose. They’ll place one end in the water and then blow into the other end to bring much-needed oxygen to the suffering menhaden. [2] Protect the menhaden from those fisherpersons who net and snag menhaden to use as bait for bluefish and striped bass. STM will prepare Bunker Boats that will zoom in to cut nets and snagging lines before the fisherpersons can harvest the hapless menhaden.

Bunker are typically 10-12 inches long, but can grow larger than that.

On a more serious note, “Tidewater,” a fisherman from Centreville, MD, writes: The high-rollers out of Virginia are harvesting over 100,000 metric tons of bunker a year and almost all are taken from the lower Chesapeake and just outside of the Chesapeake in the ocean. Spotter planes are used to locate the fish…. The consequence of this harvest of menhaden is that the Chesapeake has lost a great portion of not only the forage fish for stripers in this breeding sanctuary, but also the quality of the bay which has been negatively affected by the loss of these wonderful, filter-feeding fish which are both vital and beneficial to the water quality. Now, many of the stripers are suffering from large open wounds which are attributed to near starvation. Consequently, the stripers look for another source of food, and while much of that is filled by perch, spot, and croakers, they are also vacuuming the bottom of small crabs...as a result, the crab population is being hit very hard. Ecology is a complex balancing act, and no one effort like limiting menhaden harvests, or replanting grasses or oysters, is going to solve the problem.
Posted by Len at 10:17