First Stripers of the Season

22 March 2008: : Got up this morning determined to get the boat ready for fishing…so scooted off to Stratford with the large vehicle full of Coleman coolers [don’t use them to cool anything on the boat…just for storage; in fact, one of them has a cushion on the top and it serves as a seat], cleaning materials, brush, net, boathook, and all the other accoutrement that are essential to the boat for effective fishing]. Arrived at the dock to see Shoo-Fly 3 looking rather lonesome; it was the only boat in the water at the dock. So I got all the stuff on the boat…and it was still early, so…well why not give the boat a quick run and see how everything is operating? Just happened to have a rod and reel in the car [snicker], so threw that on the boat and headed up the River [Housatonic River]. The boat ran fine, so decided to run up to where the fish hang out…just to see if anyone was catching. Should point out here that was not exactly dressed for this. It was 45 degrees with the wind 15-20 knots out of the northwest; water temp was 40 degrees. Was all right on top with a fleecy jacket and a Gore-Tex windbreaker over that, but had no long johns under the trousers…and on the feet, a pair of Crocs with no socks. So the run up north was brisk. Arrived at the first area where there were likely to be fish and, sure enough, could see them on the Garmin fishfinder stacked up like cordwood in 30 feet of water. Said to myself, “why not try to catch the first striped bass of the year?” Why not, indeed? Put on the white plastic swimbait that had worked so well in Islamorada and after about four casts, caught a nice striper of about 20 inches. 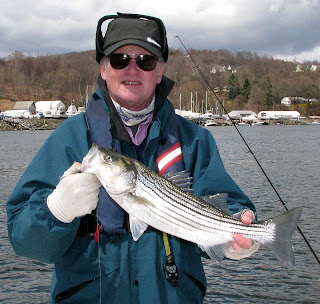 Changed to a lure with a dark back and light bottom and caught one on each of the next two casts. Decided that, facing the cold run back to the dock, and as I wanted to go see Uncle Dick who’s in Bridgeport Hospital getting his plumbing sorted out, that I’d quit while ahead…and headed south.
Posted by Len at 19:31